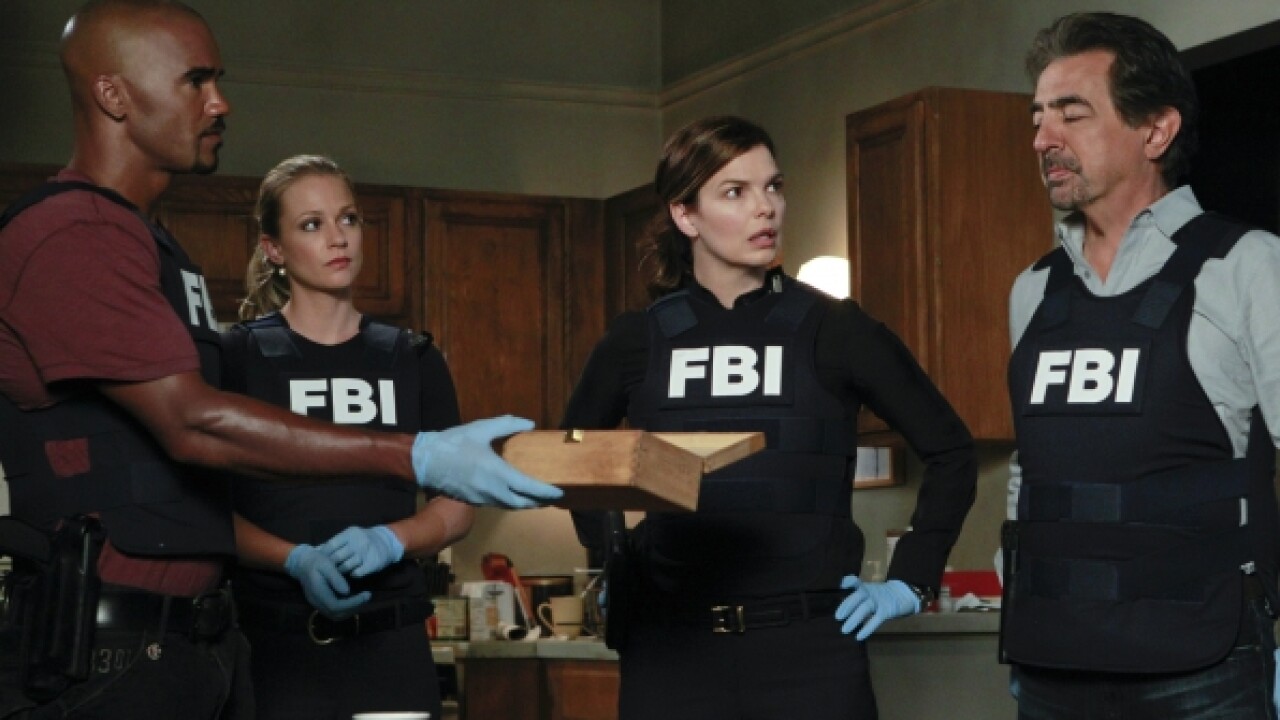 The team discovers the potential victim has a secret life and he keeps trophies from it.

The team discovers the potential victim has a secret life and he keeps trophies from it.

Justice is not blind, according to this week’s episode of “Criminal Minds.” Apparently she will hunt you down, beat you with a bat, and then drag you to your death behind a car.  That has to be one of the worst ways to go.

This week’s episode showed us more of how Alex Blake works with the team. I’ll admit it; she’s starting to grow on me.  I think it’s partially because the whole episode wasn’t focused on her this week. I also liked that she’s getting to see just a bit more about how Reid’s mind works. When he was spouting off how the killer could get from San Diego to Los Angeles and still have time for tacos between murders, I was kind of amazed.

Pretty early in the episode we see two women are behind the murders. Slowly we learn it’s because they both lost a child. Darlene’s daughter was raped and was still missing; Ellen’s nephew was killed by a drunk driver. Neither woman felt that justice was served since both people charged got minor sentences. The met in a support group chat room and created their version of revenge. Here’s the thing though: Darlene was really hesitant about the murders while Ellen seemed to enjoy it.

The duo is eventually led to the last member of the group of boys who raped Darlene’s daughter. Right off the bat you can see something just doesn’t fit right with the guy. JJ’s instincts weren’t the only ones going off. Go figure, he’s a psychopath. He says he can show where he little girl’s body is buried. First, he makes them kill a random person. He says he wanted them to feel how he felt when he killed the little girl. Ellen does it, of course. Then, he takes them to where the skull is buried. Yes, only the skull. When he heard his other friends had been killed he dug up the body and buried it in different places. Darlene has finally had enough. She kills the guy with a shovel.

Rossi tracks down the duo to where they’re staying in Mexico before going their separate ways. Ellen tells Darlene she has to start thinking of herself more. The writing on the wall spells out what’s going to happen. Ellen is captured and Darlene gets away. Ellen does see Darlene sitting on a bus, but Ellen seems happy that Darlene’s escaping. I know people deal with grief in different ways, but dragging someone who’s alive behind a car is rough.

There was a really cute moment that wasn’t part of the main plot. Rossi has 31 vacation days and he doesn’t want to use them. So in a stroke of altruism, he tells Garcia to give them to coworkers who have spouses in the military. What a nice man.

What did you think of last night’s episode? I’m just glad we won’t have to wait two weeks to see another one.