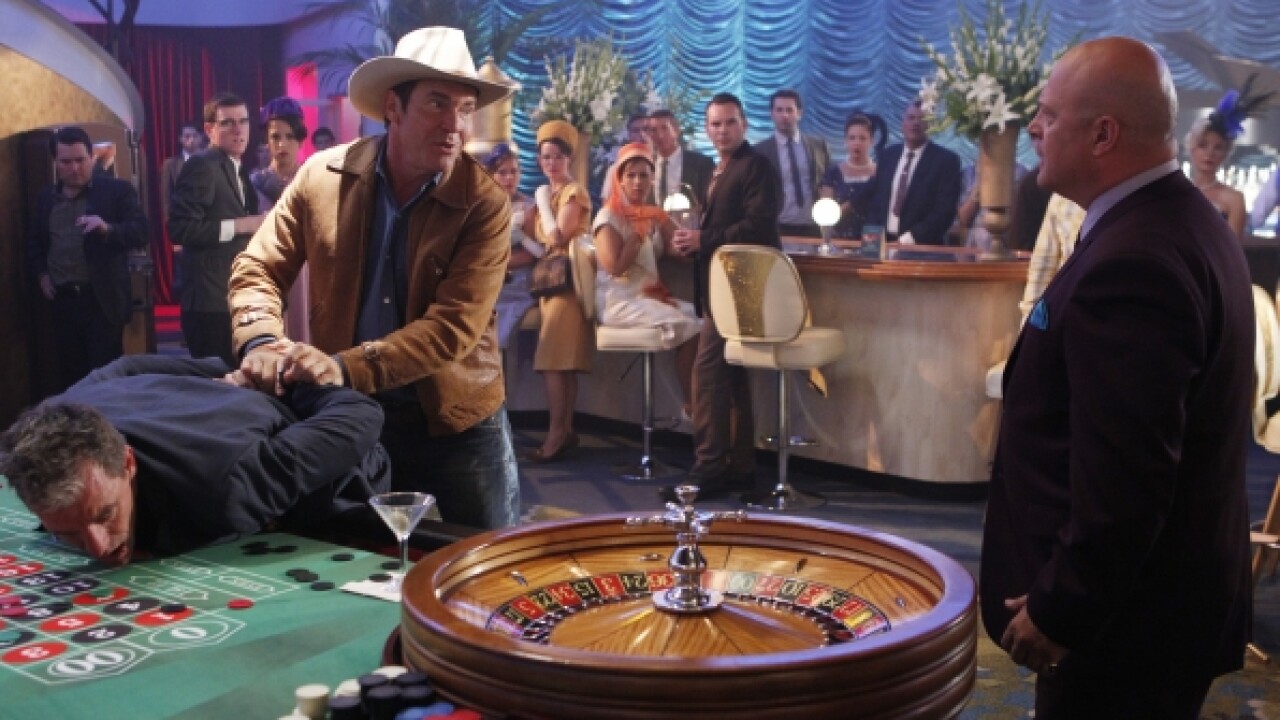 Sheriff Lamb arrests Johnny after he shows up on the casino floor where he’s not allowed to be.

Sheriff Lamb arrests Johnny after he shows up on the casino floor where he’s not allowed to be.

Now that’s what mobsters were really like in the 60s, I think. They had mean faces, where with one look you knew they weren’t to be messed with.

Dad: I liked that they brought the real mob to Las Vegas.

Me: How do you know what the real mob was like?

Dad: I grew up around them. It didn’t matter if it was New York, Chicago, or Jersey, a mobster is a mobster.

(Side Note: My Dad is not, nor has he ever been, involved with the Mafia, I think).

Vincent Savino had more trouble than just the sheriff this week on “Vegas.” His big boss from Chicago came down for a visit with the hot-headed loan shark, who is also the father of the new money manager. Right off the bat he tries to convince his daughter they should be skimming money off the top from the casino. You can tell she thinks a lot of her dad, but I don’t think she’s completely sold on the idea.

Dad: I think she’s going to end up siding with Savino. The way she was talking about him being the future of the town seemed like she was more on his side.

Me: I agree. Her enchantment with her dad wore off when she saw the angry side of him.

Savino is trying to butter up the loan shark because he has the big boss’ ear and can make things happen. It seems that Savino is the only person looking towards the future in “Vegas.” He wants to add a restaurant, boxing arena, and more to make sure his customers stay inside the casino instead of going elsewhere. The bosses aren’t convinced it’s a great idea.

Dad: I liked how they used the 1960s Olympics this week.

Me: Do you remember that happening?

Dad: Of course I remember it. I was 17 when it happened.

Sheriff Lamb, with his brother and son in tow, is trying to figure out who killed the gold-medal boxer. Turns out it was Cassius Clay, aka Muhammad Ali, because of the asthma medicine he slipped the victim. It gave him a heart attack. Clay was hoping the medicine would make the boxer sick so he’d stop fighting and wouldn’t break his neck. But before the heart attack, the victim was beat over the head by a teammate. It turns out, the teammate was beating his wife and the victim was trying to help her get away. The sheriff was able to find her thanks to some extra help.

Dad: That was funny when they were all scrambling to figure out what LASTUC7 meant and the secretary just walked up and said it like it was nothing. (Laughter)

(Side Note: it referred to the 7pm bus from Vegas to Tucson).

The sheriff and the loan shark I mentioned earlier crossed paths at the casino and it wasn’t pleasant. The loan shark got locked up so he wanted to kill Sheriff Lamb. At a table discussion, Savino convinced the boss it was bad business to have two dead sheriffs in one month.

Dad: That’s how the mobsters aired their problems. They came to the table and presented it for discussion.

Me: How do you know so much about the Mafia? Is there something you need to tell me?

Dad: I watch a lot of movies.

There were more scenes this week featuring the mobsters than the sheriff, which is a definite plus. I think that balance is better. The details about how they’re managing the mob, the money, and the slick greediness with which they run Las Vegas makes me hooked. I hope it stays this way.

Oh, and even though the spouse-abusing teammate didn’t actually kill the champion boxer, they still arrested him for assault with a deadly weapon.

So what did you think about the new episode? Are you going to keep watching “Vegas” or are you passing it over?