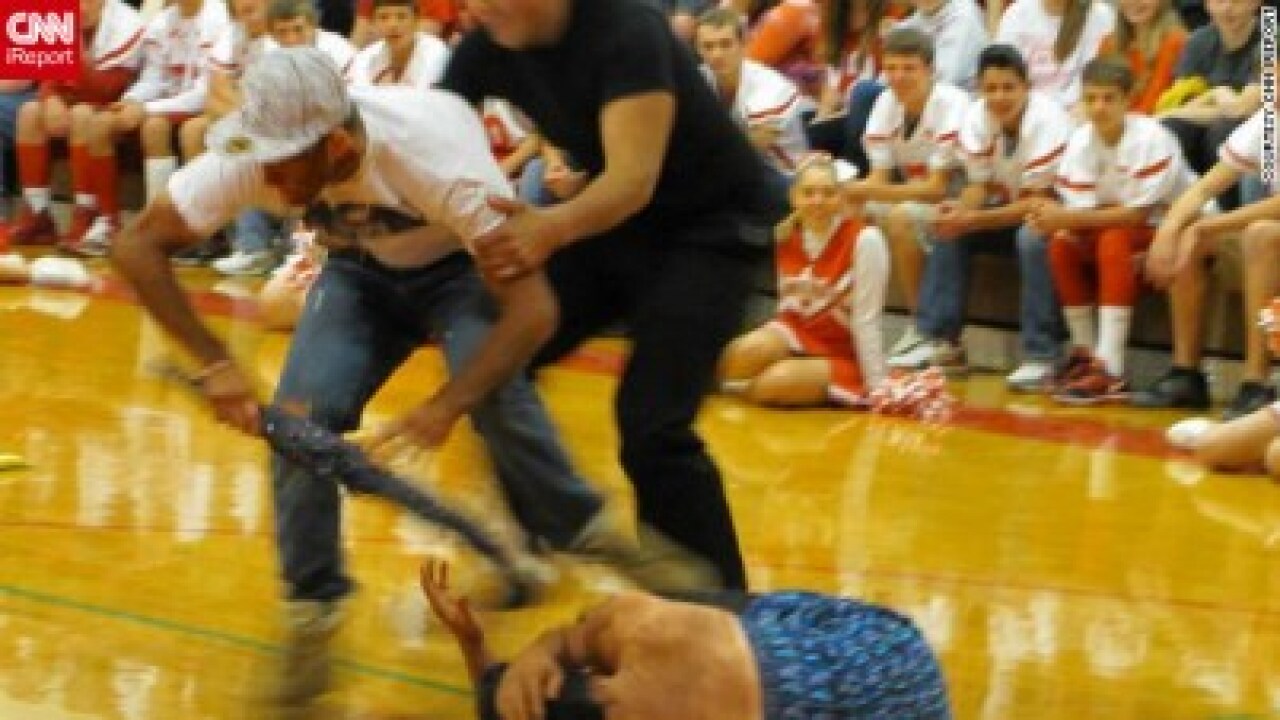 WAVERLY, New York — It was a homecoming rally to cheer on the Waverly Wolverines football team. They were undefeated this year. Everyone was proud.

Then, in the midst of the cheers and a sea of red and white pom poms came a 30-second skit that, for some, turned an afternoon of school pride into one of shame.

Three white male students involved in the skit made light of domestic violence, and they did it in racist manner, say some.

Two were in blackface as they re-enacted a 2009 domestic abuse incident in which singerChris Brown assaulted then-girlfriend Rihanna. The student who played Brown was vying for the school’s “Mr. Waverly” title — a school tradition in which skits are performed and the one that garners the most applause wins the title.

On Monday, Waverly alum Matthew Dishler posted a photograph of the skit on CNN’s iReport. He says someone shared the image on Facebook.

By Tuesday afternoon, the CNN iReport had more than 46,000 views and showed up on Huffington Post, Buzzfeed and Gawker and in local newspapers.

Twitter lit up with comments about the skit. Many were critical, but some defended the skit.

“I don’t think it was offensive at all,” said Chelsea House, who earned her high school diploma from Waverly last year and moved to Alabama but returned for homecoming last week and saw the skit.

Waverly Central School District Superintendent Joseph Yelich said Tuesday that he did not believe the students in the skit intended to offend anyone.

Waverly resident Thomas Rumpff, a 2007 graduate of the high school, said he believed most of the kids were unaware of the historical context of blackface, a form of theatrical makeup used by white people in minstrel shows that perpetuated racist stereotypes of African-Americans.

Rumpff said the Rihanna incident had also been satirized online and on television before.

“Was this a little bit inappropriate? Yes,” he said. But said the incident “has been completely blown out of proportion.”

Other incidents of blackface have surfaced this year, including a Colorado Springs second-grader who offended a teacher when he painted his face black to resemble the Rev. Martin Luther King Jr.

The Waverly High skit was approved by school officials before it was performed, Yelich said. He acknowledged the problem and said he was speaking with students, teachers and staff at the school in the coming days.

“My concern is to start making something teachable out of this particular circumstance,” he said.

Other skits at the pep rally involved Tarzan and a dairy farmer milking his cows. Last year, a student played Tiger Woods, also in blackface.
“I have heard about blackface, but … they’re portraying Hollywood events,” alum Ryan Bronson said. “It would be the same thing if he bought a mask.”

Bottom line, Bronson said: People are being too sensitive.

“They go crazy about every little thing,” he said. “The school and everybody are going to basically stop letting kids be kids.”

Dishler said he posted the image not to cast a harsh light on anyone but to prod the school to do better with issues of diversity.

“I don’t believe the kids really knew what they were doing is as offensive as it is,” Dishler said. “The administration was watching this go on, and they let it happen.”

He said Waverly, a small town off Interstate 86 just west of Binghamton, New York, could easily be seen as a place that affirmed stereotypes of all sorts.

Chituc said he was “extraordinarily offended” by the skit and ashamed that his school seemed to be OK with it.

“On the one hand, I can’t blame the kids for being ignorant,” Chituc said. “It’s a small town, and the kids don’t know any better. It’s the responsibility of the administration to let the kids know this is not how you behave in 21st-century America. … They’ve been failing at that spectacularly.

“The administration should be creating an environment where minorities are welcome, not the butts of racist jokes that make light of domestic violence.”

He sent CNN Forero’s response, which read in part:

“Thank you for your concerns. We will continue to address issues of diversity and respect for all. The format of pep rally will need to be reconsidered. I appreciate your concern for your alma mater.”

Yelich, for his part, said he could see how the skit could have been misconstrued and that he intends to set clearer expectations for behavior.

“I have some opportunities here to make positive change,” he said.

CNN was not able to obtain the names of the students involved in the skit.

Whatever their intentions were, one thing was clear: Their portrayals of Chris Brown and Rihanna fell short — the kid who played the dairy farmer was crowned Mr. Waverly.