Just after noon on Monday, officials with the Southampton Sheriff’s Office say they got a call from someone who said he was watching five people steal a piece of farm equipment from a lot near General Thomas Highway and Sunbeam Road.

The caller told authorities that he saw the people leave with the piece of equipment.

Deputies were dispatched to the area. 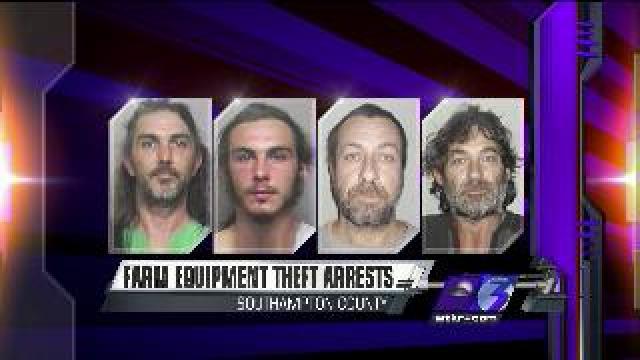 The vehicle was stopped on Delaware Road just south of General Thomas Highway.

They notified the owner of the equipment about the incident, and he was able to identify the property as his according to deputies.

Deputies arrested four men for grand larceny including Julian Perry, Thomas Perry, Paul Day, and Melvin Day. They say a juvenile was released to a parent under the direction of the Court Services Unit.

Julian and Thomas Perry were also charged with possession of marijuana.

Deputies say Melvin Day had an outstanding warrant for possession of dangerous drugs.

Melvin Day is in Southampton County Jail with no bond.