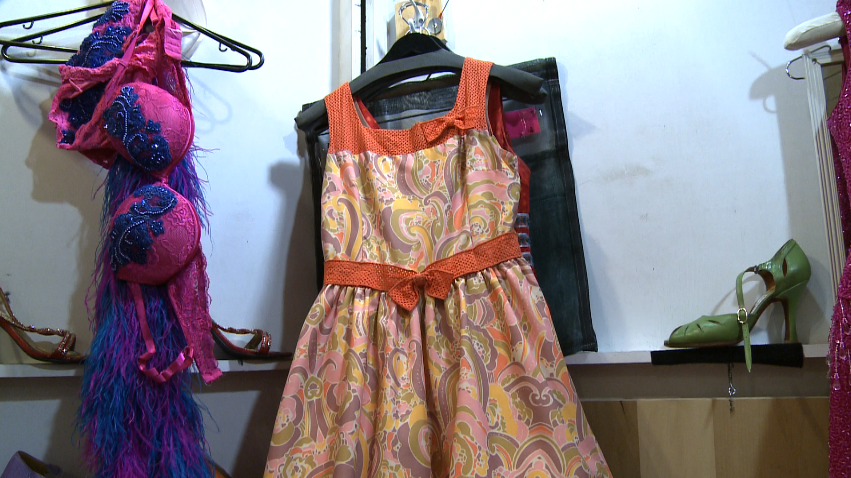 The Broadway musical Jersey Boys has everyone singing at Chrysler Hall this week.  It’s the true story of Frankie Valli and the Four Seasons. We hear a lot about the guys in the show, but what about the Jersey Girls?  NewsChannel 3’s Juliet Bickford went behind the scenes to find out!

It looks like there are dozens of women in the cast, but every part is played by just three actresses!  Their names are Kaylee, Rachel and Marlana.  Each actress juggles 18 costumes and 12 wigs in a small changing booth backstage.  Kaylee says, “It's like a Nascar pit stop.  And that's what it feels like; you run in and people just whip you out!”

Collectively, the actresses play more than 50 characters in the show. That means a lot of quick changes!  Sometimes they only have seconds to get into their next costume.  They have a few tricks to pull it off!  Their shoes look like they have buckles, but they are fastened with a little hook.  And all the jewelry is magnetic.

But watch carefull.  Blink, and you might miss some of these costumes.  Kaylee showed us one dress and said, “I wear this one to grab one of the guy's guitars, kiss him, and then make my way swiftly off the stage.”

And all the ladies love their “Angels” costume.  They wear form-fitting sparkly gowns to sing “My Boyfriend’s Back”

Rachel says, “They're skintight.  sparkly and fabulous onstage.  It's a total girl power number, so everyone has total fun with this one.”

And the transformation wouldn’t be complete without a new hairdo for each character.  That means about a dozen wigs for each actress.

The show is playing at Chrysler Hall in Norfolk now through Saturday, March 16.

Check out some of the great 60’s fashion in our poll. Vote for your favorite “Jersey Girls” dress and wig!