Newport News, Va. - A Virginia Beach woman says while she was helping someone find an item in Walmart, someone else was busy swiping her wallet!

Ilaine Hooker says she was the victim of a crime by distraction.

On March 3rd, Ilaine Hooker stopped at the Walmart located at 12401 Jefferson Avenue to pick up a few items.

That's when a pair stole her wallet from her purse in what police say was a case of larceny by distraction.

"I went down to pick up one more thing and as I was leaving that aisle, a lady said 'ma’am, ma’am' three times," Hooker said. "She said she had a sick friend that she wanted to fix a meal for and she had high blood pressure so she wanted something with no sodium."

While Hooker helped the woman pick out a meal, a male accomplice swooped in and stole her wallet from the purse that was strapped into the shopping cart.

"I got up to the register and I noticed my purse had been unzipped and I said 'Oh my gosh' and I opened it up and my wallet was gone," Hooker explained.

Detective Thomas Peregrine says surveillance video from the Walmart shows the man and woman leaving the parking lot in the same vehicle.

Police believe the duo may be responsible for similar crimes in the area.

Now Hooker is left trying to replace the items stolen from her wallet and wondering how she'll ever feel safe shopping again.

"How do I go into a grocery store? How do I go into a department store?" Hooker asked. "I can’t take my purse on my shoulder anymore, I’ve already seen a lady get hurt from that. I can’t strap it in the basket anymore because I know they’ll take it. So what do you do? Where do you put your wallet? Your money?" 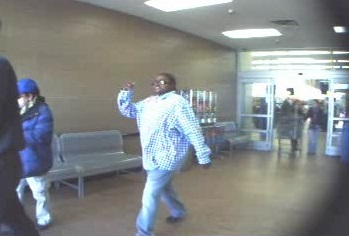