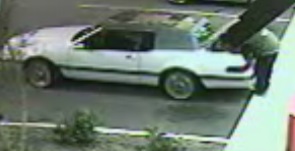 Chesapeake, Va. – A man is wanted in Chesapeake for stealing cell phones from a local business, police tell NewsChannel 3.

He approached a store employee and asked to take a look at two cell phones.

When the cell phones were placed on the counter, police say the suspect grabbed them and left the store.

He drove away from the area in a late model, white, two-door sedan with a damaged dark soft top.

If anyone has information about this suspect, they are encouraged to call, text, or submit an online tip to the Chesapeake crime Line.