Two bombs, on a Boston roadside, designed to rip apart people and lives.

The horrible kinds of bomb wounds being treated as a result are what military surgeons on the battlefield have handled for 15 years. And what they’ve learned is undoubtedly helping Boston’s civilian surgeons save lives.

Navy surgeon Angela Earley treated bomb traumas in Iraq and Afghanistan. What civilian doctors are facing in Boston was her life for months on end.

“I don`t think you ever get used to that,” she says.

What doctors like Earley have learned in battle will help save lives in Boston. And those civilian doctors are facing the same horrible decisions she frequently faced, a literal choice between life and limb.

The amputations that are being performed are being done by doctors that are conscientious that people want to save their leg over all things, but when it comes down to preserving their life over their limb, they are always going to choose their life.

Reporters' questions to the Boston doctors today centered on how many amputations they had to make. That's a question Capt. Earley has been asked countless times, but one that doesn't describe what happened in the operating room.

“A lot of times I get asked, how many amputations have you done? And I say the explosions did the amputations. I just cleaned it up,” she says.

On the battlefield, surgeons like her have learned to save as much leg as possible. That can mean better success when a patient is fitted with a prosthetic limb. And that's another area where civilians have learned from the military. Advances in prosthetics and rehabilitation mean soldiers, sailors and Marines who lost legs don't have to lose out on fulfilling lives. Dr. Earley says that lesson applies to the civilian survivors in Boston just as much.

“We`ve been dealing with 15 years of this in the military. We`ve seen these horrendous injuries and saving these people`s lives,” she says. 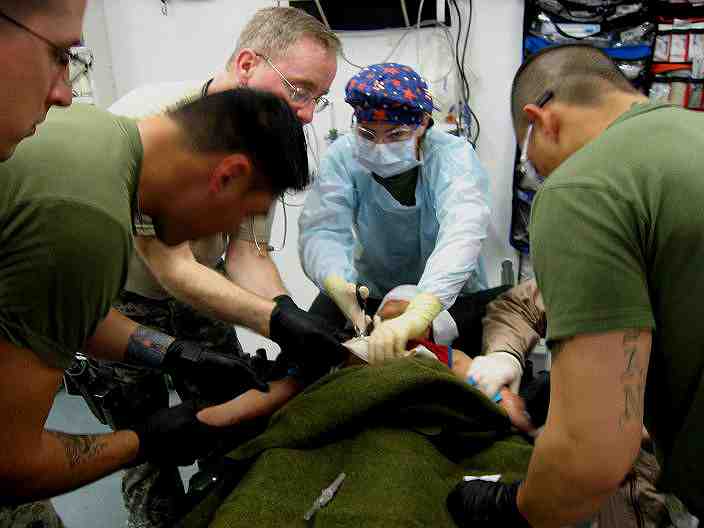