The next step for the company will be to launch a Cygnus capsule to the International Space Station. If that mission is successful Orbital will follow with eight missions to deliver cargo to the ISS.

Speaking about today’s successful launch, Governor McDonnell said “I wholeheartedly congratulate Orbital Sciences Corporation on the first launch of their new Antares launch vehicle. I would also like to thank our team at the Virginia Commercial Space Flight Authority (VSFA) for their years of hard work and efforts in making MARS one of the most attractive places in the country for the commercial aerospace industry to do business. The Orbital/VCSFA relationship is emblematic of how government and the private sector can successfully partner together to grow Virginia businesses and create jobs. The completion of Pad 0A last year and today’s successful launch are tremendous steps forward for both Orbital and the Commonwealth of Virginia. I look forward to our continued partnership with Orbital as they work to meet their contract with NASA and the VCSFA works to further develop and grow the commercial aerospace industry in Virginia.”

Orbital is building and testing the Antares rocket and Cygnus cargo spacecraft under NASA’s Commercial Orbital Transportation Services (COTS) program, which aims to develop safe, reliable and cost-effective transportation to and from the space station and low-Earth orbit. 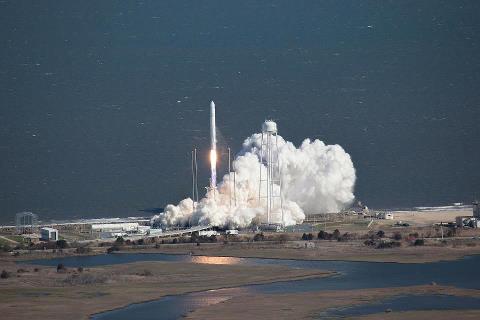 Following the successful completion of the COTS demonstration mission to the station, Orbital will begin conducting eight planed cargo resupply flights to the orbiting laboratory through NASA’s $1.9 billion Commercial Resupply Services contract with the company.

Click here to read more about the COTS program.

#Antares is in orbit!

The poll has been completed to begin fueling of the Antares rocket at NASA’s Wallops Flight Facility in Virginia. Launch is go for 5pm.