Portsmouth, Va –  A man was assisted by the Cost Guard Saturday after his sailboat ran aground in the Albemarle Sound.

The man called the Coast Guard around 1:30pm requesting assistance for his sailboat, South Bound.

The Coast Guard was able to free the 30-foot sailboat and tow it to a pier in Elizabeth City.

The RBS crew arrived on scene at approximately 2:15 p.m. and transferred a crew member to the sailboat for assistance.

“We passed over a bridle and secured it to the sailboat’s mast through the chock on the bow of the sailboat,” said Petty Officer 3rd Class Brandon Spence, the coxswain of the RBS from Station Elizabeth City. “We turned the sailboat’s bow into the seas and as the waves lifted the sailboat, we were able to make way approximately 200 yards out of the shoal water.” 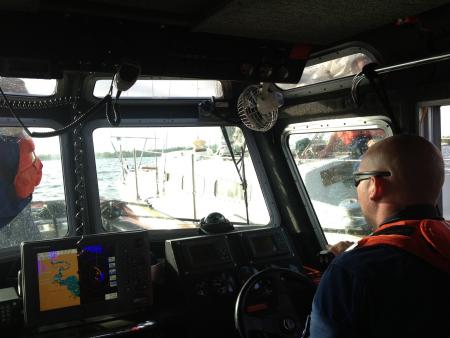 It took the RBS crew almost two hours to free the boat.

The sailboat arrived at the Elizabeth City Shipyard shortly before 7:00pm.