(CNN) — A 50-foot-wide, 15-ton magnet is about to set out on a 3,200-mile barge-and-truck tour down the East Coast of the United States, around Florida and up from the Gulf to Chicago before going to work to measure one of the smallest particles known to science.

Currently at the Department of Energy’s Brookhaven National Laboratory in Long Island, New York, the massive particle storage ring is scheduled to travel to another DOE facility at the Fermi National Accelerator Laboratory in the suburbs of Chicago, where scientists hope it will help more accurately measure the properties of subatomic particles called muons. The tiny particles exist for only 2.2 millionths of a second, according to a press release from the Brookhaven lab.

The massive magnet creates a magnetic field 30,000 times the Earth’s magnetic field, but is so fragile that the coil it contains can’t bend more than a tenth of an inch to maintain its current precision.

The voyage, scheduled to begin on Saturday and end in July, will send the metal behemoth on a journey on trucks and barges. For safety, when it is on the road it will be traveling about 5 mph, so most of the highway portion will happen at night to limit traffic interference. 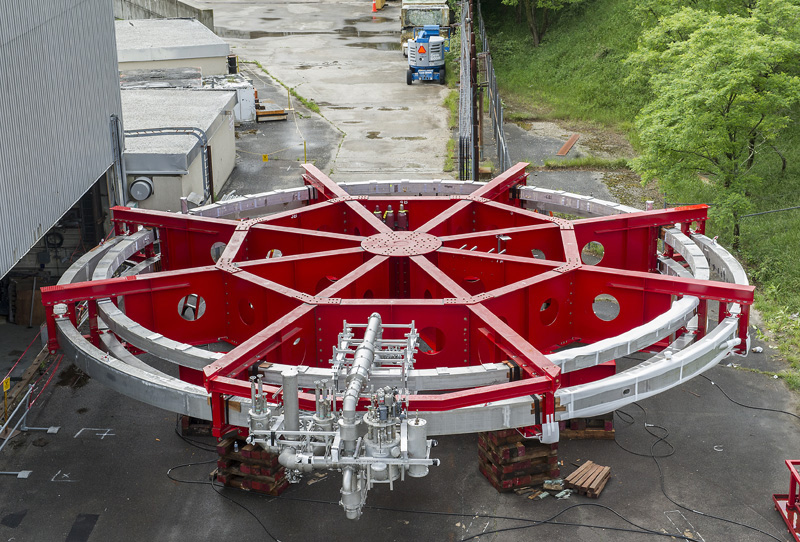 Once settled in its new home, the magnet will be part of an experiment measuring what is called in physics the g-2 (pronounced the gee minus two) of the muon.

The existing measurement is already very precise and one of the most well-defined measurements in physics. Nearly every physics theory has required it as a baseline, according to Fermilab.

The goal of the new measurement is precision to 140 parts per billion — the same as measuring the length of a football field to a precision of one-tenth the thickness of a human hair.

This experiment aims to find a measurement four times more precise than the currently accepted measurement. Should that value be substantially different from the value current equations predict, it could usher in a new era of particle physics, scientists say.

Fermilab has a website tracking the location of the magnet at http://muon-g-2.fnal.gov/bigmove/.