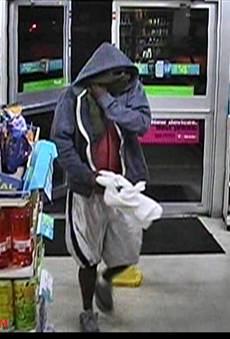 Norfolk, Va. – Norfolk police need your help to find suspects who they say have robbed several businesses in the city.

They say there are at least two suspects who they think robbed three businesses over the past two weeks. They are accused of robbing two 7-Eleven stores on Colley Avenue and a Family Dollar on Tidewater Drive.

The first suspect is described as 6’0 tall, with a thin build and is between the ages of 25-35. The accomplice is described as wearing a yellow shirt and was seen casing the store before the robbery.

Police say the suspects were seen getting into a dark colored SUV that could be a Ford Explorer or a Mercury Mountaineer. It has racks on the roof and grey trim around the base and it also has rims.