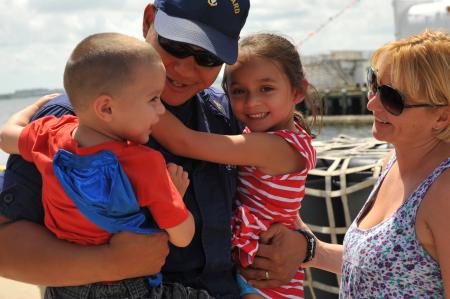 Portsmouth, Va. – The crew of the Coast Guard Cutter Northland arrived back in Portsmouth Thursday in time for 4th of July festivities following a successful two month patrol in counter-drug, alien migrant interdiction operations and search and rescue.

Maintaining a visible presence off the coast of Haiti, Northland deterred smugglers from transporting drugs and illegal migrants and from committing other illicit activities.  During the cutter’s two-month patrol, there were no reports of illegal migrants departing Haiti by sea, which undoubtedly saved lives as smugglers’ vessels are commonly overloaded and unseaworthy.

“Homecoming is so much sweeter to be back on the 4th of July,” said Cmdr. Holly Harrison, Northland’s commanding officer. “After an eventful patrol, being back home makes us appreciate the success of our missions, being with our supportive families and friends and, most importantly, the dedication of our crews who serve their communities and their country.”

“I’m very proud of our hard-working crew,” said Lt. Cmdr. Michael D. Sharp, Northland’s executive officer. “With each successful drug bust and search and rescue case, it brings to fruition the relevance of homeland security and national defense missions: we are keeping drugs off the street and helping to save lives.”