Norfolk, Va. - What is going on with Downtown Norfolk construction?

The gaping holes, large sewage pipes, and bulldozers may not be around much longer - some of the construction is coming to an end.

The Ghent Area Sanitary Sewer Pipeline Replacement Project will be complete in early September of this year.

It's the project that has had crews at Boush Street and Olney Road, as well has Voss Street - digging, drilling, milling and paving since February of 2012. 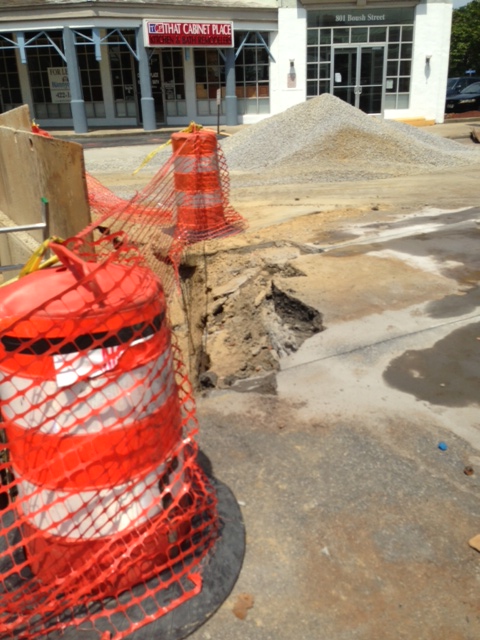 "HRSD is nearing completion of a major project to replace and relocate three miles of sanitary sewer pipeline located in the Young Terrace, Ghent and West Ghent areas of Norfolk. The old pipeline, which was built in the 1940's, had reached the end of its useful life. Construction started in February 2012. All of the required tie-ins should be completed in a month, and we estimate that final paving will be finished in early September," says Nancy L. Munnikhuysen, HRSD Chief of Communications.

Tracy Bogan of TA Sheets, a contractor for HRSD, says his team has been out doing the work for over a year, and now it is almost finished.

Boush Street and Voss Street were torn up twice - the reason being, the city of Norfolk does not allow extended closures. So they build the road back up to give drivers relief - and then, they dig it up again, to continue working.

"Believe me, I'd love to have the work finished. But that's just the way it goes," Bogan says.

What are they doing? Bogan explains:

The sewage pipes they are working on run all through Ghent - to businesses and homes.

This is raw sewage - it runs through the main treatment plant, Bogan says.

It may seem like the roads have been "torn up forever" - but some Norfolk residents say they don't mind it, and they have learned to adjust.

Elisa Mangubat, who lives in Ghent, says she has learned to navigate around the road work.

"I'm used to it because I live in Ghent," she says.

The next step before it's all over?

Virginia Paving Company crews will soon head to Voss Street - where the sewage construction has been completed. Milling and paving are expected to last for "a couple days", says Bogan. The same will happen for Boush Street, at the end of the summer.

HRSD officials say the entire project will be finished in September of 2013.