Suspects wanted for stealing from homes, pawning items in Portsmouth 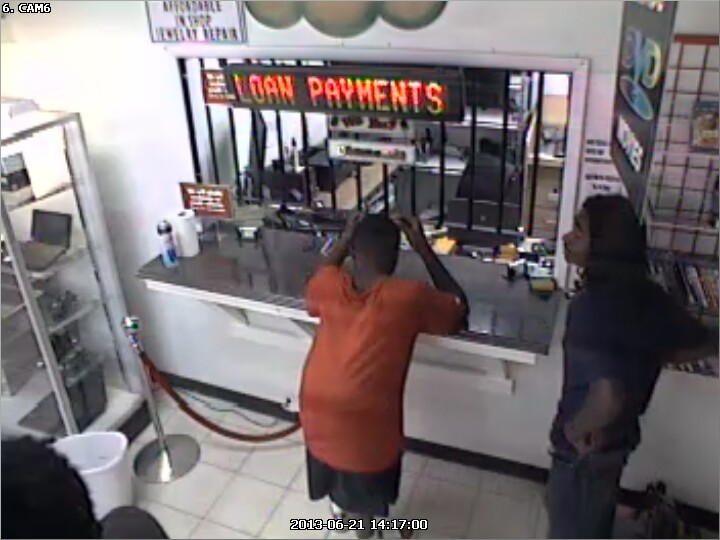 Portsmouth, Va. – Over the past few months, the Portsmouth Police Department has seen an increase in burglaries.

Police say suspects are entering homes and taking a variety of items. In some cases, the items are showing up in secondhand shops.

With the assistance of pawn shop owners, items are being recovered and suspects are being identified.

The photos above are surveillance photos from Cash Money Pawn, courtesy of the Portsmouth Police Department.

Cash Money Pawn is located in the 5000 block of Portsmouth Boulevard. The suspects in the photos are attempting to pawn items taken in two identified burglaries.

Detectives believe these four men are responsible for several other home break-ins. Along with the items they pawned on June 19 and June 21, were other pieces of women’s jewelry.

The first burglary occurred on June 17, 2013. Police say around noon, a man secured and left his home in the 3900 block of Greenway Court. When he returned at approximately 2:45 p.m. he found the front door damaged. Suspect(s) had kicked a hole in the door panel. Once inside the suspect(s) ransacked the entire house. Numerous pieces of jewelry were taken, to include a Movado watch. The watch, which contained a serial number, was one of the items pawned by the four suspects at Cash Money Pawn on June 19.

On June 19, 2013, a woman left for work at approximately 8:00 a.m. She returned around 7:00 p.m. and found her home, located in the 3900 block of Race Street, ransacked. Suspect(s) entered the home by crawling through the dog door. After taking a lap top, jewelry, camera equipment and an Xbox, the suspect(s) left through the back door.

The first photo is the vehicle the four suspects were in on June 21 when they attempted to pawn items at Cash Money Pawn.

The vehicle is possibly a Lexus or Toyota, with damage to the front, just above the passenger side light.

Here are the suspect descriptions from Portsmouth Police:

1. A black male wearing a red shirt and black shorts.

3. A black male wearing a gray t-shirt, and jeans. He has shoulder length braided hair, partially pulled back.

Police say the man wearing the back ball cap, with his back to the camera, in photograph #5 is not affiliated with the four suspects.

Property Crime Detectives are asking for assistance from the public in identifying suspects, and the whereabouts of the stolen property.

Anyone with any information can call the Crime Line at 1-888-LOCK-U-UP or TEXT “Portsmouth” plus your tip to 274637 (CRIMES). Information leading to an arrest, or recovery of property could earn a cash reward of up to $1000. You do not have to give your name or come to court.