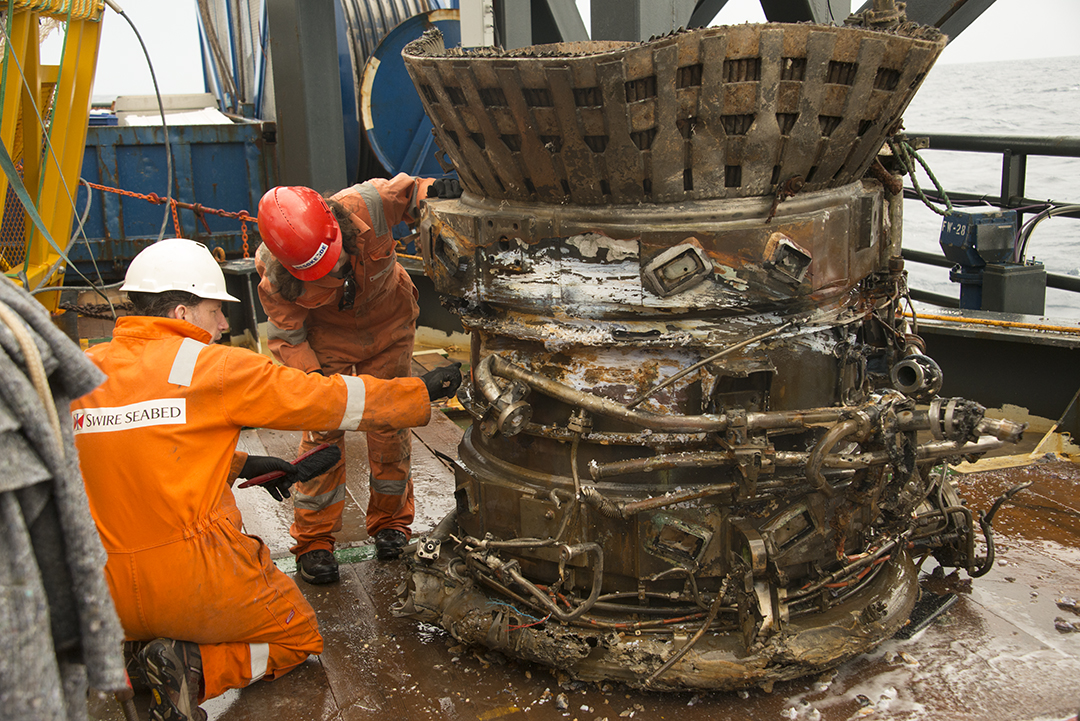 (CNN) — Amazon founder and CEO Jeff Bezos rescued sunken treasure in the Atlantic this year: components of two F-1 rocket engines. Now he says he has verified that they are engines from Apollo 11, the first mission that took U.S. astronauts to the moon.

The timing, as Bezos is aware, is appropriate. Saturday is the anniversary of the 1969 moon landing.

“44 years ago tomorrow Neil Armstrong stepped onto the moon, and now we have recovered a critical technological marvel that made it all possible,” Bezos wrote on his blog.

Bezos congratulated the conservation team at the Kansas Cosmosphere and Space Center in Hutchinson, Kansas, for its efforts.

One of the conservators discovered that the number “2044” had been stenciled in black paint on the side of one of the massive thrust chambers. He found it while using a black light and a special lens filter.

This 2044 was not a mystery. According to Bezos, it corresponds to NASA number 6044, the serial number for F-1 Engine No. 5 from the Apollo 11 mission.

The conservator continued his work on this thrust chamber and, after removing more corrosion, found a stamp on the metal surface that said “Unit No 2044.”

“Conservation is painstaking work that requires remarkable levels of patience and attention to detail, and these guys have both,” Bezos said of the Kansas conservators.

An Internet retail mogul might seem an unusual patron of Apollo 11 artifacts and history. But Bezos said he was inspired to dream big by watching the original moon mission as a 5-year-old in 1969.

The Amazon chief announced in March that his team of researchers had discovered a set of giant rocket engines that he described as “an underwater wonderland — an incredible sculpture garden of twisted F-1 engines.” They were found in 14,000 feet of water off the Florida coast.

F-1 engines powered the Saturn V rocket carrying Neil Armstrong, Buzz Aldrin and the Apollo 11 mission to the moon. But the engines were ejected after takeoff and considered destroyed or lost forever.

Bezos had said in 2012 that he wanted to find the Apollo 11 rocket engines but noted that many serial numbers are completely or partly missing.

“The components’ fiery end and heavy corrosion from 43 years underwater removed or covered up most of the original serial numbers,” he wrote on his blog Friday.

Each of the engines weighs nearly 9 tons, and they came in a cluster of five. They provided 32 million horsepower by burning 6,000 pounds of fuel every second, and together, they lifted the largest rocket in history 38 miles above the Earth in less than three minutes.

After doing their work, the rockets plummeted into the ocean at 5,000 miles per hour. That’s where they remained, undiscovered for decades, until Bezos’ team found them using sophisticated sonar.

“The technology used for the recovery is in its own way as otherworldly as the Apollo technology itself,” Bezos wrote in March. “The Remotely Operated Vehicles worked at a depth of more than 14,000 feet, tethered to our ship with fiber optics for data and electric cables transmitting power at more than 4,000 volts.”

His team felt the echoes of the moon mission as they probed the icy depths of the ocean: “The blackness of the horizon. The gray and colorless ocean floor.”

Having taken space venturers to the moon, the engines are now the treasure of a different breed of explorers. Bezos said he intends to put the hardware on display “where just maybe it will inspire something amazing.”