Soldier receives Medal of Honor at the White House 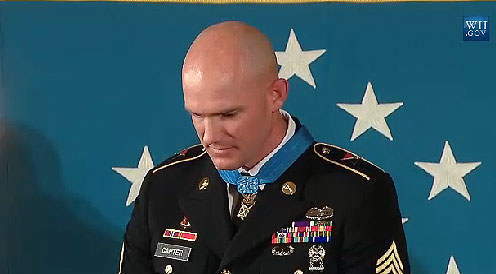 WASHINGTON (CNN) – It was a devastating Taliban attack, launched on an eastern Afghanistan outpost positioned so poorly it was nearly indefensible. Combat Outpost Keating was tucked in a valley surrounded by towering mountains.

“Just every kind of weapon they could get their hands on they were throwing at us, and we hadn’t seen that before,” said Spc. Tom Rasmussen.

Eight men died, but there were heart stopping heroics to defend the base.

Staff Sgt Clint Romesha was already awarded the Medal of Honor, the nation’s highest honor for his bravery in the face of overwhelming odds during the battle.

On Monday there was a second White House ceremony, this time to award the Medal of Honor to Sgt. Ty Carter, a member of B troop, nicknamed the Bastards.

The morning of the attack, Carter had been risking his life running ammunition to troops, when a sniper pinned down him and four others in a Humvee.

The vehicle’s roof-mounted weapon was destroyed by a rocket propelled grenade and the men were sitting ducks.

“They were totally ineffective in that position. They had no more ammo left, they were getting hit from every which way,” said Romesha.

Sgt. Josh Hardt led two other soldiers to try and shield the trapped comrades with their own Humvee, but it was a suicide mission. Hardt and Spc. Chris Griffen were killed in the attempt.

Bad went to worse, rounds penetrated the Humvee and the enemy was now inside the base. The five men trapped decided they need to get out of there.

Three tried to make a run for it while Carter and Sgt. Brad Larson provided cover.

Carter sprang into action, running out while insurgents were still firing rounds at them, rescuing Mace, and bringing him back to the Humvee.

But they needed to get Mace help, and Carter once again braved the bullets and ran and retrieved Gallegos’s radio.

“Is anyone still alive?” they radioed.

“We got Mace. Mace is pretty jacked up. We need to get him to the aid station,” Larson said.

The men of 3-61 Cav hatched a plan to unload everything they had into the enemy positions. With that cover, Carter and Larson carried Mace on a stretcher, and the three made their escape.

The battle continued until dusk. Before dawn, eight of the men from Black Knight Troop had been killed.

But Mace was not one of them.

President Barack Obama mentioned some lessons from Combat Outpost Keating in his remarks about the valor of Clint Romesha.

“Our troops should never, ever, be put in a position where they have to defend the indefensible. But that’s what these soldiers did — for each other, in sacrifice driven by pure love. And because they did, eight grieving families were at least able to welcome their soldiers home one last time. And more than 40 American soldiers are alive today to carry on, to keep alive the memory of their fallen brothers, to help make sure that this country that we love so much remains strong and free,” Obama said.

Soon the president will honor the valor of Carter.

Two Medals of Honor for the same battle is very rare. The award for Ty Carter marks the first time in almost half a century that one battle resulted in two living service members being awarded the military’s highest honor.

Spc. 4th Class Raymond R. Wright and Sgt. Leonard B. Keller received the Medal of Honor for actions during a battle in the Ap Bac Zone in Vietnam on May 2, 1967. President Lyndon Johnson awarded their medals in 1968.

Two service members – Sgt. 1st Class Randall D. Shughart and Master Sgt. Gary I. Gordon – who were killed in the “Black Hawk Down” fight in Somalia were posthumously awarded the Medal of Honor for that battle, which was on October 3, 1993 — exactly 16 years before the attack on COP Keating.