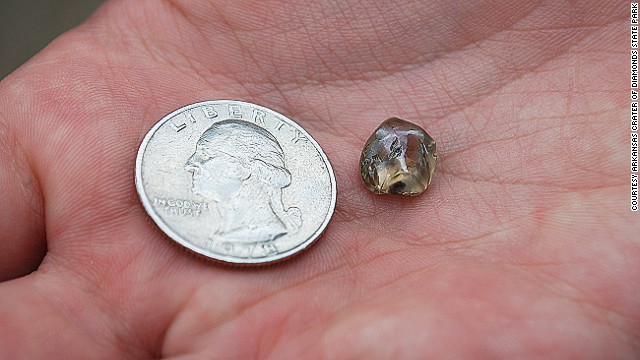 (CNN) — “Remember the time Mikey found that massive diamond at that park?”

That’s how one North Carolina family is going to remember this summer.

Boy Scout Michael Detlaff, 12, was visiting an Arkansas park with his family on July 31 when he found a 5.16-carat “honey brown diamond” in the park’s “diamond search area.”

“It is thrilling any time a child finds a diamond here.”

The Arkansas’ Crater of Diamond State Park is the only diamond-producing site in the world open to the public and this is not the first time a diamond has been found, nor is it even close to the biggest diamond discovered at this awesome park.

Visitors can dig for diamonds in the park’s 37.5-acre plowed field, which was originally a diamond mining site before it became a state park in 1972.

John Huddleston, the farmer who originally owned the property, is credited with starting the diamond mining rush when he first found diamonds in Murfreesboro.

The park’s policy is finders keepers, which means Michael went home with his diamond, which he named “God’s Glory Diamond.”

“Michael had only been searching for about 10 minutes when he found his diamond,” said Park Interpreter Waymon Cox in a press release. “In fact, Michael’s dad was renting mining equipment to begin his own diamond search when Michael showed the gem to him at the park’s Diamond Discovery Center!”

Michael’s find was the 12th diamond weighing over one carat found at the park this year, and the 27th largest diamond found since the opening of the park.

One thing we don’t get — how are there any diamonds left? Why hasn’t it been mobbed with millions of tourists every day going over every grain of sand with a magnifying glass and blunt instruments to ward off any greedy fingers on their immediate territory?

More fun facts about the Crater of Diamonds park

* The three colors of diamonds found at the park are white, brown and yellow.

* 40 different types of rocks and minerals other than diamonds can also be found at the park. Other gems include amethyst, peridot and garnet.

* Old buildings dating back to the park’s mining days still remain on the premises, such as the Mine Shaft Building and the Guard House.

* Due to recent heavy rains, many of the recent finds were right on the surface of the field.

* The park says two diamonds a day are found on average.

* The largest diamond ever found by a park visitor was a 16.37-carat diamond.

* Michael’s find is the 328th diamond found by a park visitor so far this year.

* Most diamonds found at the park are too small to be cut and are just kept as souvenirs.