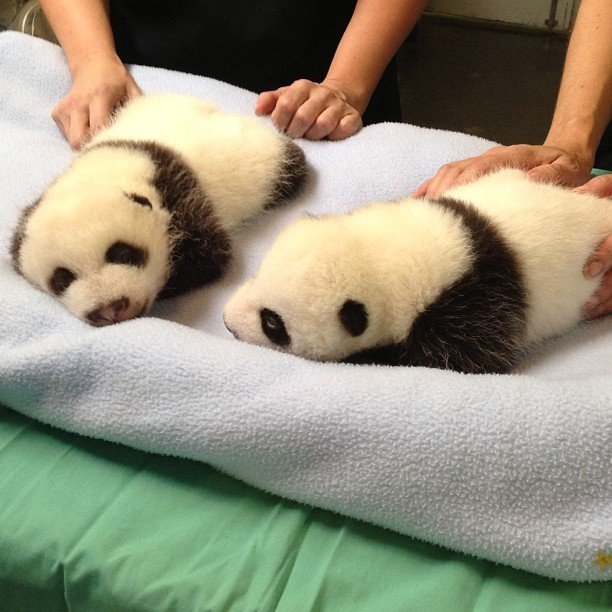 (CNN) — The only thing cuter than a baby panda might be TWO baby pandas.

CNN sent reporter Alina Machado and producer John Murgatroyd on Thursday to Zoo Atlanta for a behind-the-scenes peek at the twin panda brothers (the only surviving panda twins in the U.S.).
Machado and Murgatroyd got to watch as veterinarians weighed and measured Cub “A,” took his temperature and listened to his heart. They’ll be known as Cubs “A” and “B” until a naming ceremony 100 days after their birth, in keeping with Chinese tradition.
Rules for the panda nursery: Before entering the “secure bio zone,” Machado and Murgatroyd were required to change into yellow gowns and put on booties over their shoes. Even the tripod got booties. Machado asked if she could hold one of the little guys but the zoo said no.
Seeing the babies together was a special treat. Usually one panda is cared for by zoo staff while the other is with mom. Lun Lun is a very hands-on mom, Machado reports.
Zoo visitors won’t be able to see the pandas until this fall but a story about them is scheduled to air Friday on New Day. Until then, treat yourself to their Instagrams.
Copyright 2022 Scripps Media, Inc. All rights reserved. This material may not be published, broadcast, rewritten, or redistributed.