Virginia Beach, Va. (WTKR) - Virginia Beach Police investigators are looking to identify a man and a man who they believe are related to three cases where purses were stolen from shopping carts.

The incidents all involved older women as victims and occurred at three stores close to each other in the Red Mill area of the city:

The suspects are believed to be between 25 and 35-years-old.

Police say two of the thefts occurred from shopping carts as women were in the produce aisles of the stores and the third happened while a woman was looking at cosmetics.

If you can identify either suspect, contact Crime Line at 1-888-LOCK-U-UP. 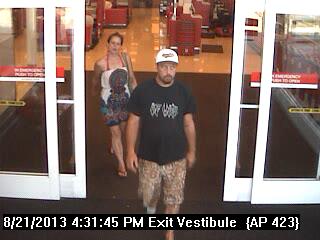