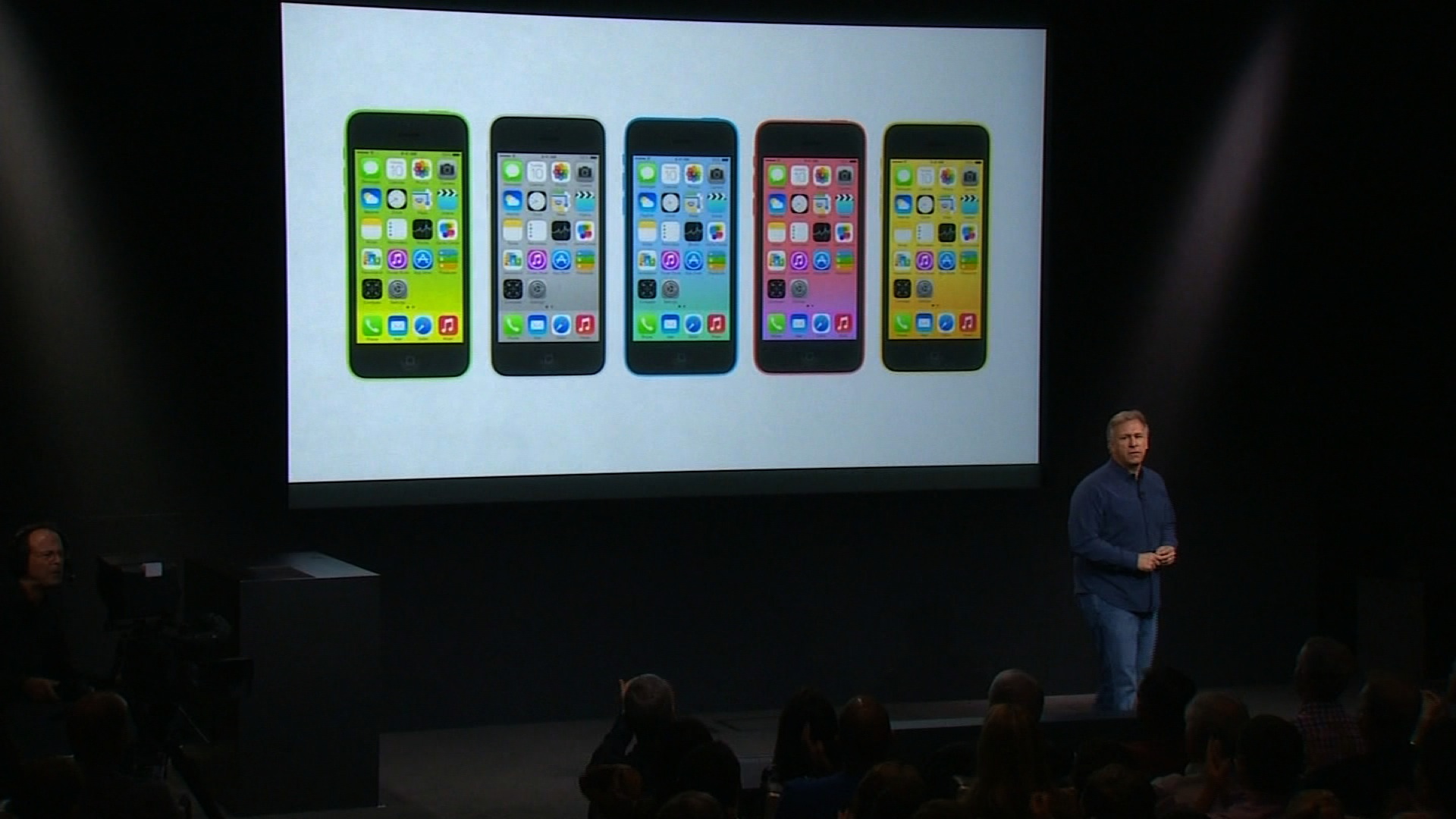 NEW YORK (CNNMoney) — The way-faster iPhone 5S is here — and so is its lower-cost, colorful plastic cousin called the iPhone 5C.

At an Apple event at its Cupertino, Calif., headquarters on Tuesday. CEO Tim Cook unveiled the new flagship iPhone 5S, which is twice as fast as the iPhone 5.

The iPhone 5S will come in three colors: silver, gray and a new gold option. The flagship device appears similar to the iPhone 5, but hardware upgrades include a beefed-up camera with a dual-LED flash to improve color balance. It also features Apple’s new A7 chip and a new M7 “co-processor” that measures motion data — a valuable feature for health and fitness apps.

The iPhone 5S has also includes a fingerprint sensor to replace passwords. Shares of Apple were down slightly in the middle of the presentation.

The flagship device wasn’t the only iPhone Apple revealed. A low-end plastic device called the 5C also made its debut.

“In the past, when we introduced a new iPhone we lowered the price of the old iPhone,” Cook said. “This year, we’re going to replace the iPhone 5.”

Cook showed off photos of the new device, which comes in white, green, blue, red and yellow. The iPhone 5C features a polycarbonate shell, instead of the glass and aluminum body of the current iPhone 5. Its guts include Apple’s A6 chip and 8-megapixel camera, like the existing iPhone 5.

Cook didn’t mention the target market early in his demo of the 5C, but it appears aimed at helping Apple expand its reach in new markets, particularly in China. Apple is holding a second launch event in Beijing on Wednesday.

The iPhone 5S may add two new color options, gold and light gray. Previous iPhone had only been available in black or white.

Earlier, the event started with Cook highlighting Apple’s work on iOS 7, the new operating system that the company previewed in June. Cook also said Apple will ship its 700 millionth iOS device by the end of September.

Apple software chief Craig Federighi came out for a quick runthrough of iOS 7, which will roll out on most older versions of the iPhone September 18.

Apple had already revealed most of iOS 7’s features at the company’s Worldwide Developers Conference. It’s a major design overhaul that Cook then called “the biggest software update ever.” IOS 7 includes a pastel color palette, much-improved multitasking ability, a better Siri voice assistant — which can now search tweets and Wikipedia — and an upgraded notifications system. The operating system also includes the new iTunes Radio, a competitor to services like Pandora.

After Federighi’s demo, Cook came back onstage to announce that Apple’s five iWork apps, including iPhoto and iMovie, will be free on new iOS devices.

What’s not expected this week: Apple will probably hold a separate event in October to focus on updated iPad and iPad Mini, as well as a revamped Apple TV. Other products supposedly in the works, including a smartwatch and an iTV, aren’t rumored to make an appearance on Tuesday either.