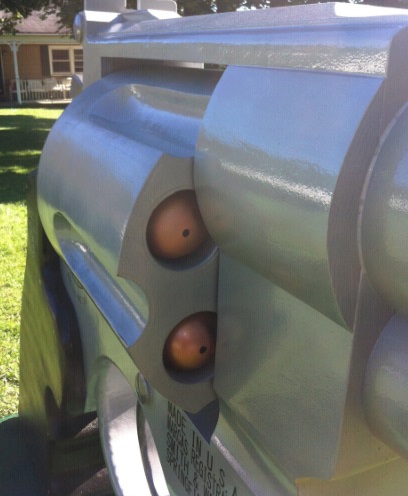 (CNN) — Roger Buchko insists he isn’t angry about receiving too much junk mail.

And the Phillipsburg, New Jersey, native isn’t trying to scare anybody off his front lawn. Nor does he say he’s trying to send a message — intimidating, political or otherwise.
The only thing Buchko hoped to accomplish by erecting a massive, scale-model .44 Magnum on his front lawn as a mailbox was to drum up business.
And that business of course is … cabinet making?
“If I can show folks I’m capable of this type of craftsmanship,” Buchko told CNN, “then I can certainly build them a fancy box.”
That’s one clever son of a gun.
“I’ve built some pretty elaborate stuff in my day” the 49-year-old said of his giant mailbox gun. “This one was pretty difficult. It’s scaled out perfect.”
At 10 feet long, 5 feet high and with an 8 and 3/8 inch wide barrel, Buchko says his Smith & Wesson is precisely 11 times bigger than the real thing.

And at 350 pounds, it’s safe to say it’s the heaviest mailbox on the block.

Buchko said he worked on it in his shop for an hour a day for nearly four months — using mostly plywood, PVC plastic, oak and mahogany.
Reaction has come in from all corners of the globe and from all corners of the gun debate.
Buchko, who says he is “not a gun-toting nitwit or anything like that” tells CNN his neighbors have mostly been supportive — and that most of the criticism comes from faraway “yuppies who don’t know anything about guns.”
As for the person who has to stare down the barrel of that gun day in and day out? “My mail lady thinks it’s great!”
While his giant gun certainly got Buchko attention, it has yet to get him any business — any cabinet-making business, that is.
He says he’s already been approached about building a giant firearm-for-a-mailbox for someone, and that is just fine by him.
“I’d rather build these things than fancy boxes.”
Copyright 2022 Scripps Media, Inc. All rights reserved. This material may not be published, broadcast, rewritten, or redistributed.