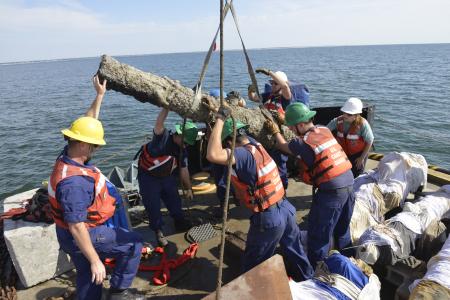 Now, for those of you who don’t speak pirate:.

Five cannons from the Queen Anne’s Revenge, the sunken flagship of Edward Teach (better known as Blackbeard), were recovered Monday by scientists from the North Carolina Department of Cultural Resources after nearly 300 years under the water of Beaufort Inlet.

The team, working with the Coast Guard, brought the big guns — 2,000 and 3,000 pounds — to the surface of Beaufort Inlet on Monday.

Billy Ray Morris, who manages the expedition, said he thinks the largest cannon is likely Swedish-made, as was another of the 40 big guns onboard that was already recovered.

The project wrapped up for the year, but archaeologists will return for one more season in 2014.

The catch brings to 20 the number of cannons that have been salvaged from the ship.

Each of the guns once fired 6-pound cannonballs. No word if any of the cannons was loaded.

They likely will be added to the Queen Ann’s Revenge exhibit in Beaufort, which has more than 280,000 artifacts.

Romanticized in history books as a notorious ruffian, Blackbeard, born in Britain, terrorized Atlantic seafarers from the shores of the American colonies to the Caribbean.

Blackbeard survived after the ship was intentionally grounded in June 1718. He left hundreds of his crew marooned, sort of an 18th century corporate downsizing, and apparently took most of the booty.

The Queen Anne’s Revenge’s remains are scuttled two miles off the North Carolina coast in 25 feet of water.

Blackbeard made it six more months before he was killed in a battle with British troops. His severed head was displayed on the bowsprit of the victors’ ship.