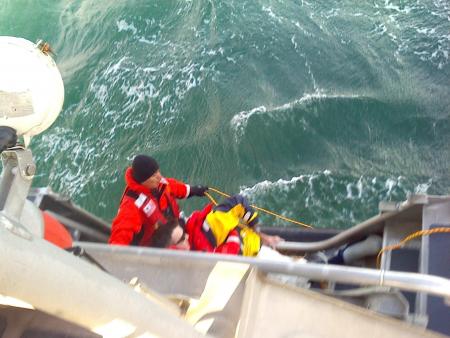 A 51-year-old man aboard a life raft was rescued Tuesday by the Coast Guard after he abandoned his 28-foot sailboat, Dove, 20 miles south of Atlantic Beach, North Carolina.

Crews were dispatched aboard a 47-foot Motor Life Boat from Fort Macon, N.C., a 45-foot Response Boat from Emerald Isle, N.C., and diverted the crew of the Cutter Staten Island, a 110-foot patrol boat homeported in Atlantic Beach, to assist.

The crew from Fort Macon arrived to find White aboard a life raft after abandoning the sailboat.

The crew rescued White and recovered the life raft at approximately 8:15 a.m. before returning to Station Fort Macon.

“The rescue was successful,” said Petty Officer 3rd Class Kevin Hallenbeck, the coxswain of the MLB.  “It was a great case to show that with everyone working in sync, the Coast Guard mission can be accomplished successfully.”

The Navy ships USS Kearsarge and USS San Antonio also responded to the UMIB but stood down from rescue operations once the man was rescued.