Before a standing-room-only crowd of thousands, Susan Ford Bales, the ship's sponsor and daughter of President Ford, smashed a bottle of American sparkling wine across the bow to christen the ship. During her remarks, she addressed the shipbuilders, reflecting on the relationships she has built with them during construction of her father's namesake ship.

"This shipyard's motto, 'Always Good Ships,' is not just a phrase; it is a way of life here for over a century," Bales said. "There is nothing—absolutely nothing—that can describe how proud I am to be your fellow shipbuilder. Your integrity and patriotic commitments to excellence are without equal. Shipbuilders of Newport News—you are a national treasure."

"There is perhaps no more visible or powerful representation of America's military strength than the hull that towers above us," said Sen. Carl Levin who served as keynote speaker. "No other nation makes carriers like America makes them, and this will be the most powerful American carrier ever to sail. Yet for every time that this ship will instill doubts in the minds of our adversaries, it will many more times give hope to our friends and to the people of the world. It will be welcome support in times of crisis, and it will also be comfort in times of disaster and grief. So it is truly fitting that it will bear the name Gerald R. Ford."

The nuclear-powered ship is the first of a new class of at least 10 carriers that the Navy expects will be steaming the seas, protecting the United States well into the next century.

The Ford itself is projected to stay in service until 2057. 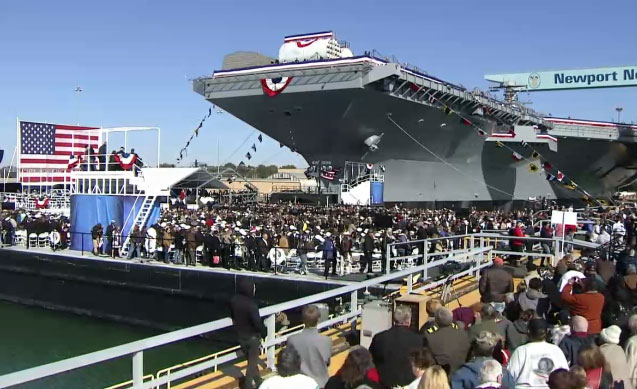 Since November 2006, more than 5,000 shipbuilders have helped to construct Ford, and suppliers from 46 states across the country have contributed specialized parts, skilled services and support to aircraft carrier production. In the weeks following the christening, the carrier will be launched into the James River and moved to a pier for outfitting and testing. The ship is scheduled for delivery to the U.S. Navy in 2016.

"When USS Gerald R. Ford joins the Navy's fleet in 2016, she will reign as America's queen of the seas for 50 years," said NNS President Matt Mulherin. "She will stand as a symbol of sovereign U.S. territory wherever she sails. She will represent her namesake—a man who embodied integrity, honor and courage. And she will forever carry with her the spirit of her sponsor, the strength of her crew and the heart of her shipbuilders."

The ship looks much like the current Nimitz-class carriers. It’s roughly the same length, width and weight.

But the island — the superstructure that rises above the flight deck — is skinnier, taller and set farther aft on the ship, allowing for more flight-deck operations and plane maintenance. It’s also part of the reason the Ford will be able to carry more warplanes and launch 25% more air missions per day than the current carriers in the fleet, according to the Navy.

Below the waterline its four 30-ton propellers will be driven by two newly-designed nuclear reactors.

The planes that will eventually be jumping off its deck in the decades ahead haven’t even been designed yet. It remains to be seen if those planes have pilots or will be controlled by operators with computers who will “fly” the aircraft from the safety of a remote location.

This new class of carriers is designed with built-in flexibility to accommodate future Navy decisions about aircraft and missions.

And it’s designed to do all this on the cheap. Most of the lights in the ship will use high-efficiency bulbs that will last twice as long between changes. And the ship is designed to require 30% less maintenance over its lifespan.

Finally and most importantly, because of designed efficiencies, it’ll put to sea with 1,000 fewer sailors and Marines than a Nimitz-class carrier. Over the life of the Ford, the efficiency of the ship, the Navy said, will save $4 billion. Click here for more interesting facts about the Ford

The ship is named after President Gerald R. Ford who served on the carrier USS Monterey during World War II and who later became President when Richard Nixon resigned in the wake of the Watergate scandal.

“It’s very fitting that our next carrier, a ship that will calm the unknown crises of the future by its very presence offshore, will be named for President Gerald Ford,” Navy Secretary Ray Mabus said at the ship’s keel-laying.

The push to name the ship after Ford began years ago and then-Defense Secretary Donald Rumsfeld actually told Ford about the ship’s name months before Ford’s death in 2006, making the new carrier one of the few Navy ships named after a living person.

“How fitting it will be that the name Gerald R. Ford will patrol the high seas for decades to come, in the defense of the nation he loved so much,” Rumsfeld said at Ford’s funeral.

Capt. John F. Meier has already been named as the ship’s first commanding officer. He will be responsible for monitoring the final months of construction and likely be onboard when the Ford goes on its first sea trials.

“I’m thrilled to be here,” Meier said in a Navy release last summer. “I couldn’t ask for a better assignment or a greater honor.”