CEBU, Philippines (CNN) — Tons of food from around the world have arrived in the Philippines, but the hundreds of thousands homeless and hungry after Typhoon Haiyan decimated part of the country have yet to get a bite of it.

The World Food Programme has delivered at least 2,700 tons of rice to the country, but the logistical nightmare of traveling to the many islands ripped to pieces by one of the strongest storms in recorded history has it arriving in drips and drabs.

“I don’t think that’s anyone’s fault. I think it’s the geography and the devastation,” he said.

The level of desolation Haiyan left behind in a country that is used to sitting out a barrage of typhoons every year took aid organizations off guard, De Bono said.

“Nobody was quite able to anticipate it.”

“We need food; we need to eat!” a crowd gathered and chanted, after a cargo plane full of food opened its loading bay in Guiuan Tuesday. 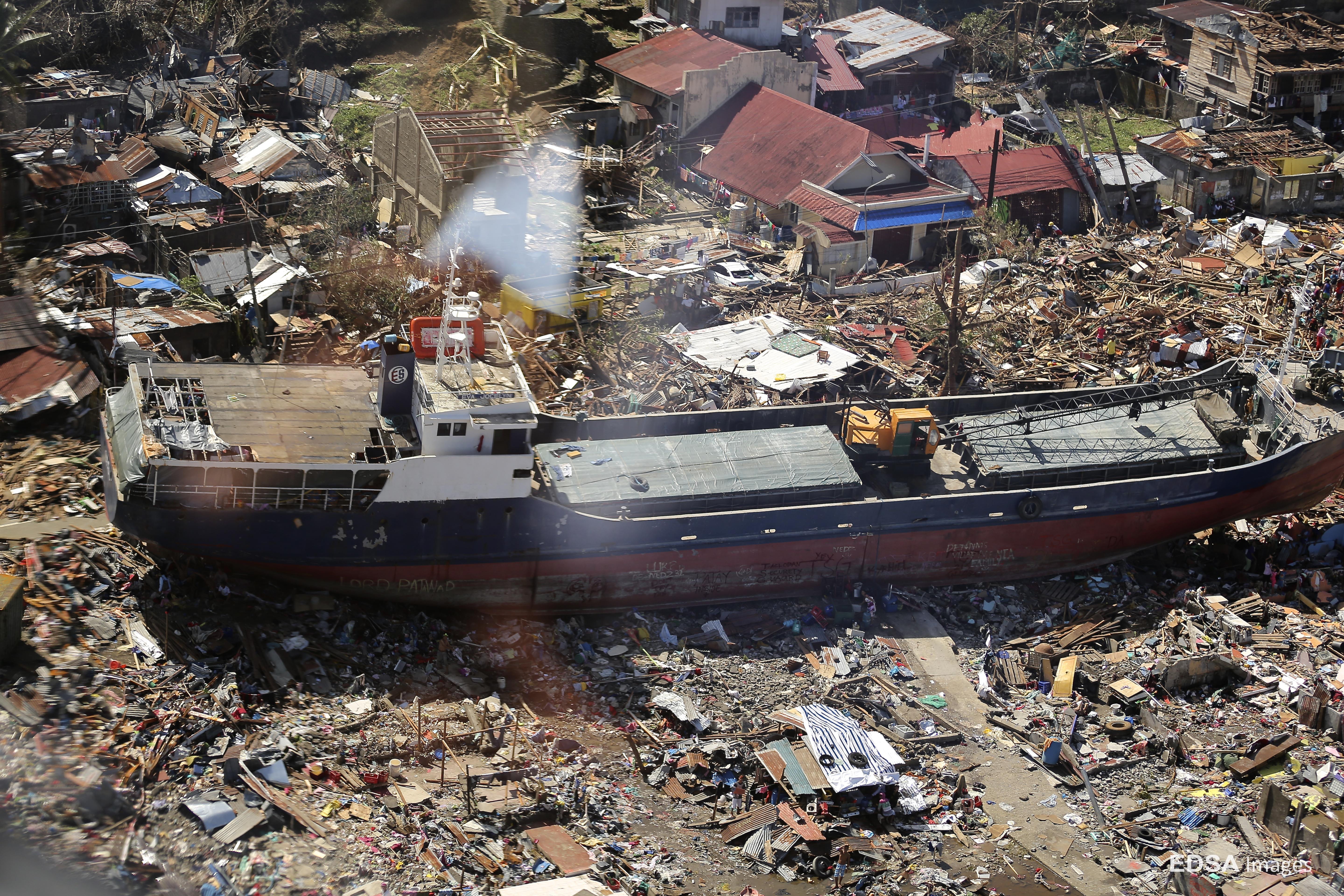 Haiyan made its first landfall there. The storm left at least 2,275 people dead and injured 3,665 more, according to the Philippine disaster agency.

The first food deliveries in Guiuan and in Tacloban, the city hit hardest by the typhoon, represent a glimmer of hope — at least to aid workers. It’s an initial sign of success after days of frustration.

It’s a start. But more than 2 million people need food aid, the Philippine government has said.

“I understand that that’s not a glimmer of hope for people on the ground, who are still waiting for assistance,” De Bono said.

He hopes to see aid delivery leap forward Wednesday. Many air strips have been cleared in devastated areas, and one flight after another lands carrying basic food.

But CNN crews on the ground have seen no sign yet of an organized cleanup or recovery operation in the most desperate areas.

Help is long overdue, storm survivor John Wynn told Anderson Cooper. “They need help now, not in a few days or in a few hours.”

In Guiuan, anticipation and desperation spread across the faces of residents as they watched troops unload bags of rice and boxes of bottled water from the C-130 cargo plane.

Many of them have been drinking filthy water to survive. And that could endanger their health, since the storm has strewn sewage into the water supply.

“The sanitation systems have been destroyed and children are of course the most vulnerable to cholera, which is a common occurrence after these kinds of disasters,” De Bono said.

Bodies of storm victims still lie in the debris, or out in the open. The government has not been able to count all of them yet, but fears of an exponentially higher death toll have subsided.

Authorities initially predicted that Haiyan may have killed as many as 10,000 people, but Philippine President Benigno Aquino III told CNN’s Christiane Amanpour that the final number would more likely be around 2,000 to 2,500.

Bodies decomposing in the sun commonly raise fears that they could contribute to the spread of disease. But that’s usually not the case, said CNN’s Dr. Sanjay Gupta.

“From a pure health threat standpoint, there are bigger threats,” he said. People need clean food and water.

The slowness of food and basic medical aid delivery is the biggest threat to lives, Gupta said.

“There are people there right now who can be saved. And it could be as simple as antibiotics that cost a penny.”

On social media, a government spokeswoman asked for donations of vaccines and antibiotics.

The World Health Organization agrees with Gupta that illnesses are a secondary concern. “Disease is not a big fear,” said spokeswoman Julie Hall. Clean food and water take priority, as well as shelter from the elements.

About half of the displaced have crowded into evacuation centers. There are hundreds of thousands left without homes, and aid organizations are struggling to get roofs over their heads.

“We’re bringing in 20,000 shelter kits, hygiene kits,” USAID spokesman Ben Hemingway said. Those shelter kits are sheets of plastic that survivors can hang up over their heads, he explained.

What happens with the bodies of the dead is important to public health, even if the corpses don’t significantly spread disease, Hall said. Survivors need to know where they are to be able to grieve and move on and take care of themselves.

In Tacloban, survivor Juan Martinez can’t do that yet.

He sits underneath a makeshift shack where his home once stood. Nearby, the bodies of his wife and two children are covered by sacks.

Everybody in his town is searching for somebody.

A dog led Yan Chow and a search crew to the body of his daughter, buried underneath debris in Tacloban.

Chow had been looking for his two children and his wife since the storm hit. He was texting with his daughter when the messages suddenly stopped, about the time a massive storm surge may have hit the city.

Her body was found not too far from where they found her brother, some distance from their house, Chow said.

He still does not know where his wife is.

There are thousands like him, who have lost part or all of their families, many of them sitting next to their corpses under makeshift shelters.

At a hospital in Tacloban, many wait for treatment, but there is no electricity and few supplies. It was too late for one young mother, who cradled her dead baby in her arms.

But home is gone.

Nine-year-old Rastin Teves made it out of Tacloban, but will take the horrifying sights she saw there with her for a long time.

“I’ve seen dead people on the streets and the sidewalks,” she said. “It made me feel scared.”

The smell of decomposing bodies also stuck with her. She watched people break into shops to take whatever they needed.

A ray of hope broke through Tacloban’s dark misfortune Wednesday.

A team of 148 search and medical workers departed Israel Wednesday with plans to set up an emergency hospital there. They are bringing 100 tons of humanitarian and medical supplies with them, Israel’s foreign minister said.

The U.S. Marine Corps is sending four more Osprey aircraft, it said Wednesday, bringing the total number of the part-plane-part-helicopters to eight. Ospreys can land and take off in remote areas like choppers, but fly further than helicopters on less fuel and carry bigger payloads.

And authorities cleared a landing strip in the neighboring province of Samar, the Philippine government said, giving aid planes better access to the ravaged city.

Tacloban’s own airport is choked with survivors clamoring to get on a handful of flights out of the wreckage that was once their city. Many are not getting out, and they have transformed the airport into a homeless shelter.

In tragedy’s midst, there are a few happy stories.

Indiana residents Ron Johnston and his wife, Charity, whose parents live in the devastated town of Baybay, were overjoyed to hear that they survived the storm.

Charity Johnston last spoke to her father on Thursday as Typhoon Haiyan was bearing down on the Philippines, but a cousin found her parents and notified her that they were alive.

Their house is completely gone, along with everything they own. “But they didn’t lose the precious thing,” Johnston said. “Life.”

Hospitals caring for survivors are overfilled, undersupplied and often have no electricity.

But in a hospital in Tacloban this week, a baby was born. Neighbors brought the mother in after she went into labor in the wreckage of the storm.

No complications, no bleeding. A perfect delivery.

Doctors and other patients erupted in applause.