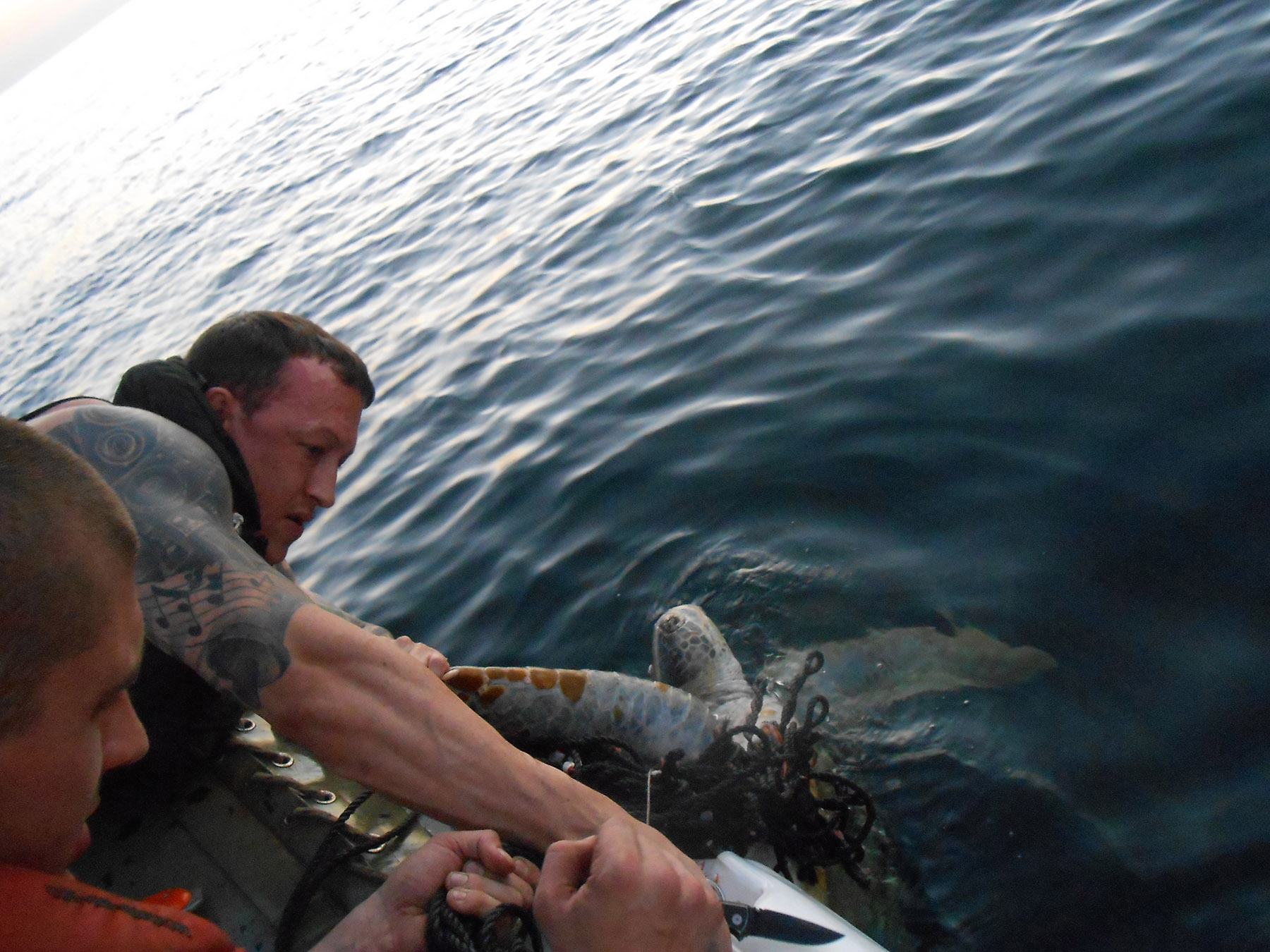 Sailors assigned to the aircraft carrier USS Harry S. Truman  rescued a sea turtle that was tangled in a makeshift fishing net on Nov. 7.

“They called away, ‘man the port davit,’ because a lookout saw some containers attached to a net in the water, and there was a sea turtle trapped in it,” said Lt. j.g. Lillian Bean, who served as the boat officer for the rigid-hull inflatable boat (RHIB) used in the rescue.

“When we launched the RHIB, the turtle was about 700 or 800 yards away from us,” said Thompson.

Allen said the turtle was tangled in a makeshift fishing net built out of jugs, metal wire, hooks and netting.

“The netting and wire were wrapped around the turtle’s fin,” said Allen. “People put these types of traps together to catch fish, and the turtle ended up getting caught.”

Bean said when the jugs start bobbing up and down in the water it signals something has been caught. That is how the lookout noticed that there was something struggling in the water.

“He looked tired and stressed,” said Bean. “I really wanted to save this turtle and not leave him out there. When we got to the turtle, we tried to grab a hold of the jugs first, but it kept swimming away.”

Reaching the turtle was the first step in what turned out to be the difficult process of freeing it.

Bean said they couldn’t put anyone in the water because of the size of the turtle, how tangled it was and the potential hazard to a rescue swimmer, so they used a boat hook to pull the entangled turtle closer to the side of the RHIB so they could work on freeing it.

Allen said additional measures were taken to keep the turtle and the entangled floating jugs from getting too far from the RHIB.

“We attached the search and rescue tending line from the RHIB to the jugs to keep the turtle close,” said Allen.

Bean said the turtle’s right front fin had wire and line wrapped around it with hooks also penetrating the turtle’s flesh.

“I was thinking that we had to absolutely save this turtle when we got hold of it,” said Bean. “We weren’t leaving until this turtle was free.”

Allen said the turtle didn’t make it easy for its rescuers.

“While we were untangling him, he was flapping his fin in the air and always trying to swim away from the RHIB,” said Allen.

“It was a great event all around,” he said. “The sea state was perfect and the RHIB team did a great job freeing the turtle and certainly saving its life,” he said. “In the Navy, we always strive to be good stewards of the environment. As professional mariners, we are obligated and take great pride in helping those fellow mariners in need. In this case, we applied our mariner culture of assistance to this wonderful creature. The smiles and excitement of the boat crew after they returned to the carrier were infectious, it was an uplifting experience.”