How to help Typhoon Haiyan survivors
Death toll rises to 3,621 as more bodies turn up in the Philippines

TACLOBAN, Philippines (CNN) – Humanitarian workers and military troops from around the world converged Thursday on the Eastern Philippines, racing against time to rescue and feed those devastated by a horrific typhoon.

The horror is everywhere thanks to what was Super Typhoon Haiyan when it came ashore six days ago, packing winds 3.5 times as strong as Hurricane Katrina, pushing in a wall of water 15 feet high and washing away towns on many islands.

The death toll from this calamity stood at 2,357 on Thursday morning, with more than 3,800 injured and 77 people reported missing. There’s every expectation the number of fatalities will rise, though no one knows how much.

Reaching all the victims and assisting the survivors — including more than 2 million people in need of food, according to the Philippine government — are both priorities now.

Literally, the biggest sign of this rush to help may be Thursday’s arrival of the USS George Washington, an aircraft carrier teeming with 5,500 crew. It’s accompanied by seven more ships that, together, have 80 aircraft — including 21 helicopters — that can deliver supplies to hard-to-reach areas and conduct search-and-rescue missions for those still holding on six days after the epic storm.

But it’s not only the United States rushing to aid the Philippines.

The European Commission notes that Singaporean, Japanese, American and Phillipines C-130 aircraft (in addition to U.S. Osprey planes) are rotating in and out of the airport in Tacloban, the city closest to the typhoon’s ground zero.

Australia has sent — in addition to monetary pledges equal to $28 million — C-17 and C-130 military aircraft equipped with doctors, nurses and military support staff. A heavy landing ship has been diverted there to help with relief and recovery, the government said.

And the British government announced Thursday that it’s sending an aircraft carrier of its own, the HMS Illustrious, with a 900-person crew and seven aircraft. This is on top of what amounts to about $27 million in aid. 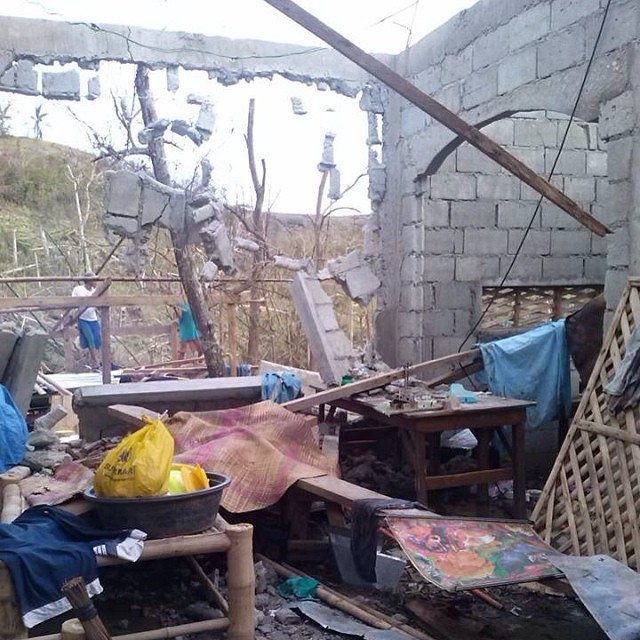 “We are now in peak danger for the spread of infectious diseases, so HMS Illustrious’ capability to provide drinking water will be invaluable,” said Justine Greening, the UK’s secretary of state for international development. “… This significant step-up in Britain’s military support will ensure a heavy-duty capability remains in place for the crucial weeks ahead.”

Money should be flowing into the East Asian country as well, given the announced pledges so far. The biggest is $500 million in emergency loans from the Asian Development Bank, which also has given $23 million in grants.

Many other countries such as Kuwait, the United Arab Emirates and Denmark have donated millions of dollars.

Still, the need is immense and, in some views, the response hasn’t been enough. The U.N. launched an appeal for $301 million in aid; as of Thursday, they’d only gotten 14.4% of that, according to U.N. humanitarian office spokesman Adrian Edwards.

As U.N. relief coordinator Valerie Amos said a day earlier, “This is a major operation that we have to mount.

In Tacloban, you can see the body bags containing human remains. Lying next to them are the bloated corpses of dogs.

There are signs of life as well, or at least desperate attempts to hold on to life.

People sift through debris in the dark, wading through rancid puddles formed after frequent heavy rain showers. Along some streets, groups sit among the stinking piles of wreckage, huddled around small fires cooking food.

There are flickers of normalcy, like a shrieking pig being shoved inside the shell of a building to be slaughtered. In front of another damaged structure, an animal carcass was being butchered. And a few vendors sell cooked pork.

But there’s not enough to go around.

At the Tacloban Convention Center, food supplies were handed out Thursday for the first time since the typhoon struck, according to people who had taken refuge there. It was the first time they had tasted rice in more than a week.

But they said they didn’t know when the next delivery might come.

“We’re all waiting for help from the government,” said May May Gula, 30, a member of one of eight families sharing what was left of a room on the building’s ground floor.

The families had taken shelter at the convention center ahead of the typhoon, heeding warnings from officials. They also managed to get to the building’s higher levels when the devastating storm surge roared in from the sea.

Many of those who remained on the ground floor were killed or injured, Gula and her friend Lina Reforzado said.

The families’ nearby homes were all destroyed, they said, and they’re now stuck in the convention center with scores of others. Clothes hang from the building’s upper floors, and makeshift shelters constructed from storm debris have sprung up around it.

“We really don’t know what we’re going to do next,” Gula said.

At the airport, large groups of people keep up their efforts get out of the shattered city. But with more security forces present, the waiting appears to have become more orderly than in previous days.

A line of people, taking shelter from the fierce sun and intermittent rain under colorful umbrellas, snakes out of the remnants of the terminal building and into the wreckage-laden parking area.

Some seem particularly in need of a quick exit. One man stood holding an intravenous drip for his wife, who sat on a chair clutching a pallid young child.

Hospitals are overflowing with the injured and the sick. But they are barely able to operate, with limited supplies and some with power outages.

The cries of the suffering echoed through a small, cramped one-story Tacloban clinic, where the medicine was all but gone Thursday.

“We don’t have any supplies. We have IVs, but it’s running out,” Dr. Katrina Catabay said.

“Most of the people don’t have water and food. That’s why they come here. Most of the kids are dehydrated. They are suffering from diarrhea and vomiting.”

Food and water are becoming scarce there, too. The military is airlifting out the elderly, children and the sick.

For at least one man, the evacuation came too late.

He died at the clinic. His body was put on a gurney and pushed to the end of a hallway because there is nowhere to put him, the clinic staff said.

In some cases, it’s not that there’s not enough food, water and other necessities. It’s that they are not being given out, because getting to those in need is so difficult.

International aid has piled up at airports, blocked from distribution to the starving by miles of debris piled up on roads to hard-hit areas.

It is taking a long time to clear them and establish communications in to remote areas, said Philippine Secretary of the Interior Mar Roxas.

Only 20 trucks are operating and they are overloaded with tasks, he said. Half are delivering food; half are clearing roads and removing dead bodies that have been lying around since the storm hit.

He led a cadaver recovery team himself on Tuesday and Wednesday, he said.

Some relief crews are circumventing the blocked roads, wastelands of debris and the danger of crime by flying over it, delivering aid by air into more remote devastated areas.

U.S. Marines have transformed a sleepy airbase in Cebu into a buzzing center of activity that included cargo aircraft, tilt-rotor Ospreys and camouflaged Marines. The Ospreys can land in remote spots where there are no cleared runways, but crews still find themselves hemmed in by debris.

“Some of those neighborhoods are inundated with water, and some of it’s inaccessible,” Brig. Gen. Paul Kennedy said.

The danger of violence also looms over the relief efforts.

Police warned a CNN crew to turn back Wednesday on the road south of Tacloban, saying rebels had been shooting at civilians.

“Maybe they are looking for food,” a police commander said.

Roxas would love to see the assistance getting out faster. Still, he feels it’s doubling by the day.

But can it come soon enough? That’s a pressing question in Guiuan, a remote community of about 45,000 people that was among the first areas hit by the full force of the storm.

“People are living out in the open; there are no roofs left standing in the whole of Guiuan,” Moens said. “The needs are immense, and there are a lot of surrounding villages that are not yet covered by any aid organizations.