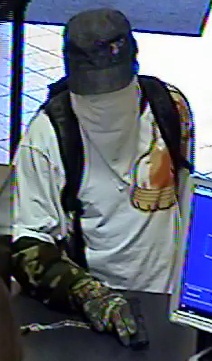 Chesapeake, Va. – Police are searching for two suspects wanted for a number of bank robberies – and a reward of up to $25,000 is being offered for information that can help lead to arrests and convictions, officials say.

For the past several years, there have been a number of bank robberies throughout the southern Hampton Roads area that are believed to be related to the same group of individuals, according to Officer Kelly O’Sullivan of Chesapeake Police.

In many of these cases, police say two armed suspects enter the bank while wearing masks and hats to conceal their identity.

The suspect(s) jump the counter, take money from the teller(s) and flee from the area in stolen vehicles.

While most cases involve two suspects, in a few incidents, only one suspect enters the bank and commits the robbery. In these incidents, police say they are believed to be related, due to similar comments made, concealment methods, robbery tactics, and getaway strategies.

Suspect descriptions are as follows:

Private funding is being utilized in the offering of a reward of up to $25,000 for the apprehension, arrest, and conviction of the individual(s) involved, police tell NewsChannel 3.

If anyone has information regarding the individuals involved in these robberies they are encouraged to call the FBI information line at 757-455-0100.