WASHINGTON, Illinois (CNN) – They sifted through the darkness, hoping their flashlights would shine on something — anything — salvageable.

Instead, they found their life’s belongings strewn in pieces among heaps of rubble where their homes once stood.

But they were the fortunate ones — the ones who survived after 81 reported tornadoes tore through the Midwest on Sunday. The storms killed six people and destroyed at least 70 homes in Illinois alone.

“These storms having been moving so fast today, it’s been hard to keep up,” storm chaser Tony Laubach told CNN as he watched a tornado touch down outside Lebanon, Indiana.

In their aftermath, the storms left impassable roads, widespread outages and blocks and blocks of homes stripped bare. Hundreds of thousands were affected; the economic impact in the millions.

“A lot of people have a pile of rubble still, and I don’t have anything,” said Michelle Crumrine. “It’s gone. I don’t know where it went.”

Crumrine was out of town when her neighborhood in Washington, Illinois, was hit. She returned to a wasteland.

Of all the cities ravaged by the storms, this city of 10,000 people in central Illinois was perhaps the hardest hit.

“It was complete destruction,” said resident Anthony Khoury. “There are people in the streets crying.”

As the dark twister churned toward his home, Khoury kept his camera glued to the window — and prayed. “Our father, thou art in Heaven, hallowed be thy name.”

“The tornado happened in my backyard, and you can hear people screaming,” Khoury told CNN’s iReport. “We were freaking out.”

Investigators have yet to determine the extent of the wrath — including exactly how many tornadoes touched down. Two National Weather Service teams will survey the damage Monday — one in Washington, and one in east central Illinois.

Throughout the night, rescue workers went door to door, poring through the rubble, looking for trapped residents.

In Illinois, two deaths were reported in Nashville; two in the Brookport area; one in Washington; and one near Unionville, officials said.

An EF4 tornado packing a peak wind of 166 mph hit ripped through Washington County, Illinois, leaving a path of debris that stretched more than 3 miles, according to a preliminary survey by the National Weather Service. 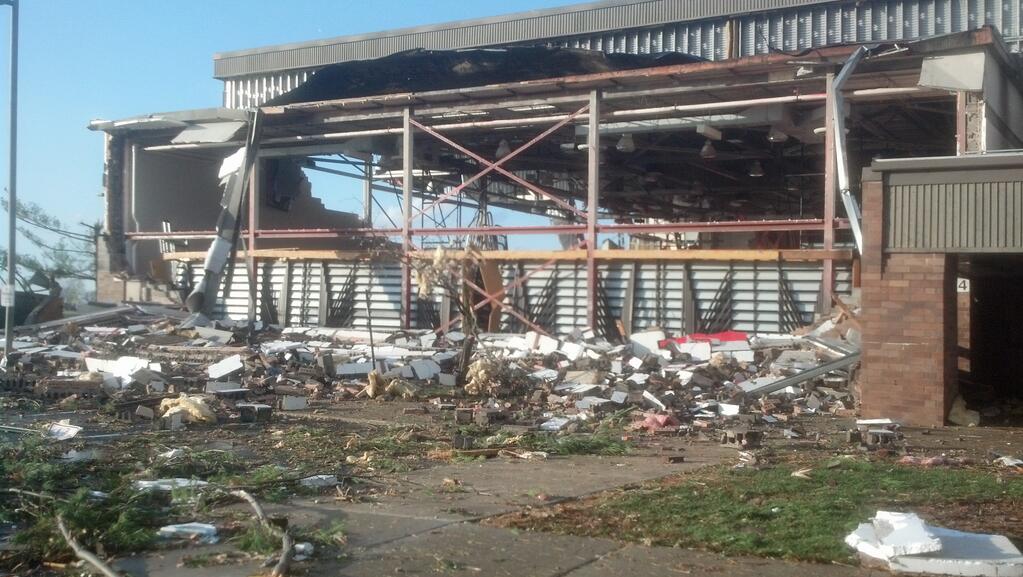 In Peoria, just west of Washington, 55 tornado victims were taken to OSF Saint Francis Medical Center, the hospital tweeted. Some of the injuries included rib, femur and pelvic breaks. Two patients were in critical condition.

And the mayor of Kokomo, Indiana, declared a state of emergency and closed schools for Monday. While the state of emergency was set to be lifted at 6 a.m. Monday, “unnecessary travel in the affected areas is still prohibited,” city officials tweeted.

There, the roof of a building sat in the middle of a road. A car rested on the mountain of rubble from a leveled home.

More than 160,000 people are without power across the state, said John Erickson, a spokesman for the Indiana Department of Homeland Security.

Officials delayed the NFL game between the Chicago Bears and Baltimore Ravens for almost two hours as storms approached Chicago, warning spectators to leave the stands at Soldier Field and head for covered areas.

“The rain started coming, the skies got black, the wind was insane, and they evacuated us to underneath the concrete concourse,” said Jim Arnold, who was at the game with his 11-year-old daughter.

“We’ve been through 15-degree-below weather and winds, but never anything like this,” Arnold said. “The winds gusted at 70 mph, and the winds and the rain were horizontal and everybody was running. It was just crazy.”

After the storm passed, fans returned to their seats and the game resumed

But thousands of travelers scheduled to fly through Chicago’s O’Hare International Airport also had to grapple with the storm. More than 270 flights were canceled Sunday, and delays overnight stretched for an hour or more.

The storms also wiped out power for more than 75,000 residents in Ohio, emergency officials said.

CNN meteorologist Karen Maginnis said the weather outbreak came later in the year than some might have expected.

“The primary time for tornadoes, as we well know, is springtime. Then we see a second high that comes in the fall,” she said. “Is this late? It is rather late, because the temperatures have been very warm.”

“On the backside of that, temperatures are dramatically cooler. So that cold air is filtering in behind it, warm air out ahead of it,” she said. “And … we get some twisting motion in the atmosphere. And that’s why we see this tornadic activity.”

While parts of Kentucky, Ohio and Tennessee were under the gun for more severe weather, no tornado warnings were in place for Monday morning.