A photo roused emotions and sparked conversations around the world – but the man at the center of the image says the moment left him speechless.

VICENZA, Italy (CNN) — A few years ago Vinicio Riva boarded a public bus in the northern Italian town of Vicenza. He went toward the nearest vacant seat but before he could sit down the man in the adjacent seat snapped, “Go away! Don’t sit next to me.”

“I wanted to answer back, but I controlled myself,” recalled Vinicio, now 53 years old. “I felt my blood pressure rise.” He stayed on the bus, standing.

“There were lots of people on the bus, and they heard it all, but no one said a word.”

Vinicio has long been accustomed to the unkindness of strangers. He suffers from a non-infectious genetic disease, neurofibromatosis type 1. It has left him completely covered from head to toe with growths, swellings and itchy sores. His mother suffered from the same illness before she died, and his sister has a milder version of it.

His aunt, Caterina Lotto, says his undershirt is often completely soaked in blood that seeps from the sores. 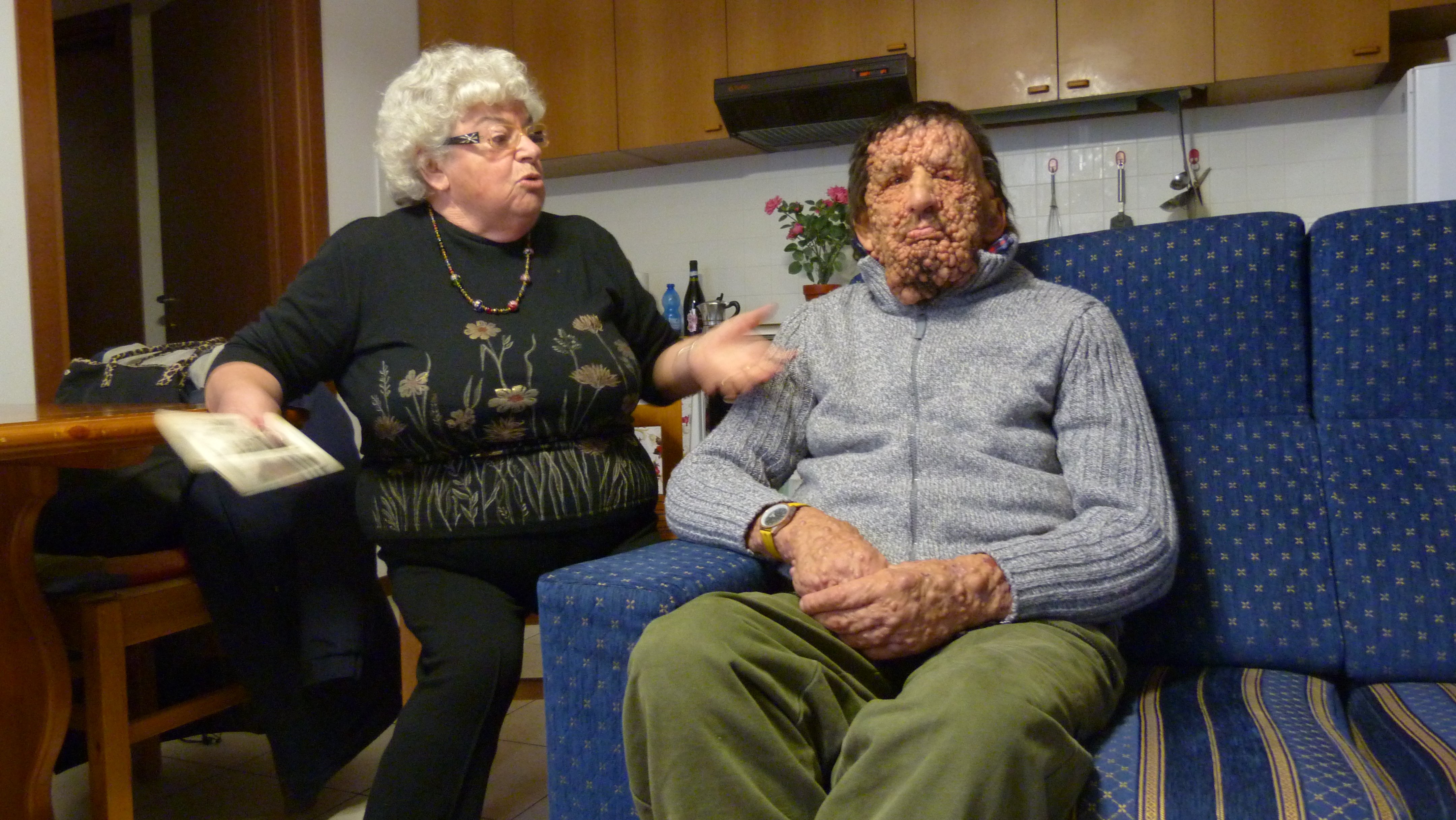 In early November Vinicio traveled with his aunt and dozens of others from northern Italy to Vatican City, where they attended a morning public audience held by Pope Francis. Vinicio, who has difficulty staying on his feet for long, was in a wheelchair.

“We didn’t think we would be so close to the Pope, but the Swiss Guard kept ushering us forward until we were in a corner in the front row,” recalled Lotto, a women in her late sixties with a quick smile and an infectious laugh.

“When he came close to us,” she said, “I thought he would give me his hand. Instead he went straight to Vinicio and embraced him tightly. I thought he wouldn’t give him back to me he held him so tightly. We didn’t speak. We said nothing but he looked at me as if he was digging deep inside, a beautiful look that I would never have expected.”

Vinicio, accustomed to stares of shock and fear, was initially confused by the pontiff’s lack of hesitation. “He didn’t have any fear of my illness,” he said. “He embraced me without speaking … I quivered. I felt a great warmth.”

In moments of drama, odd details often remain vivid. “I looked down at his shoes,” Vinicio’s aunt recalled. “They were like this,” she said, holding her hands apart and laughing. “I thought yes, this is someone who really walks.”

The entire encounter lasted little over a minute, and soon Vinicio and his aunt were back on the bus, Vinicio in a state of combined shock and joy.

“He was almost not himself,” Lotto said. “He was shaking.”

“I felt I was returning home ten years younger, as if a load had been lifted,” Vinicio said.

But life returned to normal soon enough. He went back to his job at a home for the elderly, collecting and throwing out the trash, running odd jobs. He works there on weekdays and in slower moments enjoys chatting with the residents who don’t seem to notice his condition. His preferred topic of conversation is the ups and downs of Juventus, his favorite football team.

When I ventured to discuss football with him, suggesting he should consider the merits of other teams, like Rome or Lazio, he was dismissive, shaking his head and wagging his fingers in contempt.

Diego Munari, the director of the home, said Vinicio’s energy and humor help keep the residents’ spirits up. He said, “Everyday he meets a lot of people here who like him, who chat and joke with him.”

When Vinicio finishes work, he rides his bicycle back to the flat he shares with his sister Morena. Aunt Caterina says he can be lazy when it comes to preparing meals, and often prefers to make a sandwich to avoid having to wash the dishes.

CNN Rome producers Hada Messia and Livia Borghese had been trying for weeks to speak with Vinicio, ever since the photos of his embrace with Pope Francis were first made public. Initially his family was hesitant, but the encounter with Francis emboldened him. A change came over him, he said. “I feel stronger and happier. I feel I can move ahead because the Lord is protecting me.”

“Now that people have seen him they will be less detached,” said his aunt, who also hopes the Pope’s embrace and the media furor it whipped up will raise awareness about neurofibromatosis. She is worried that cuts in cash-strapped Italy’s health and social services could impact her nephew.

Vinicio savors his moment with Pope Francis, but says he still has unfinished business.

“I hope he calls me so we can have a face-to-face meeting him and I. I have many things to tell him,” Vinicio said. One of the hallmarks of Francis’ papacy has been to call people, out of the blue.

“What do you want to tell him?” I asked.

“That’s a bit private,” he said, shaking his head apologetically. “It’s between him and I.”