The real ‘Alpha House’: Yes, this is where some Senators actually live 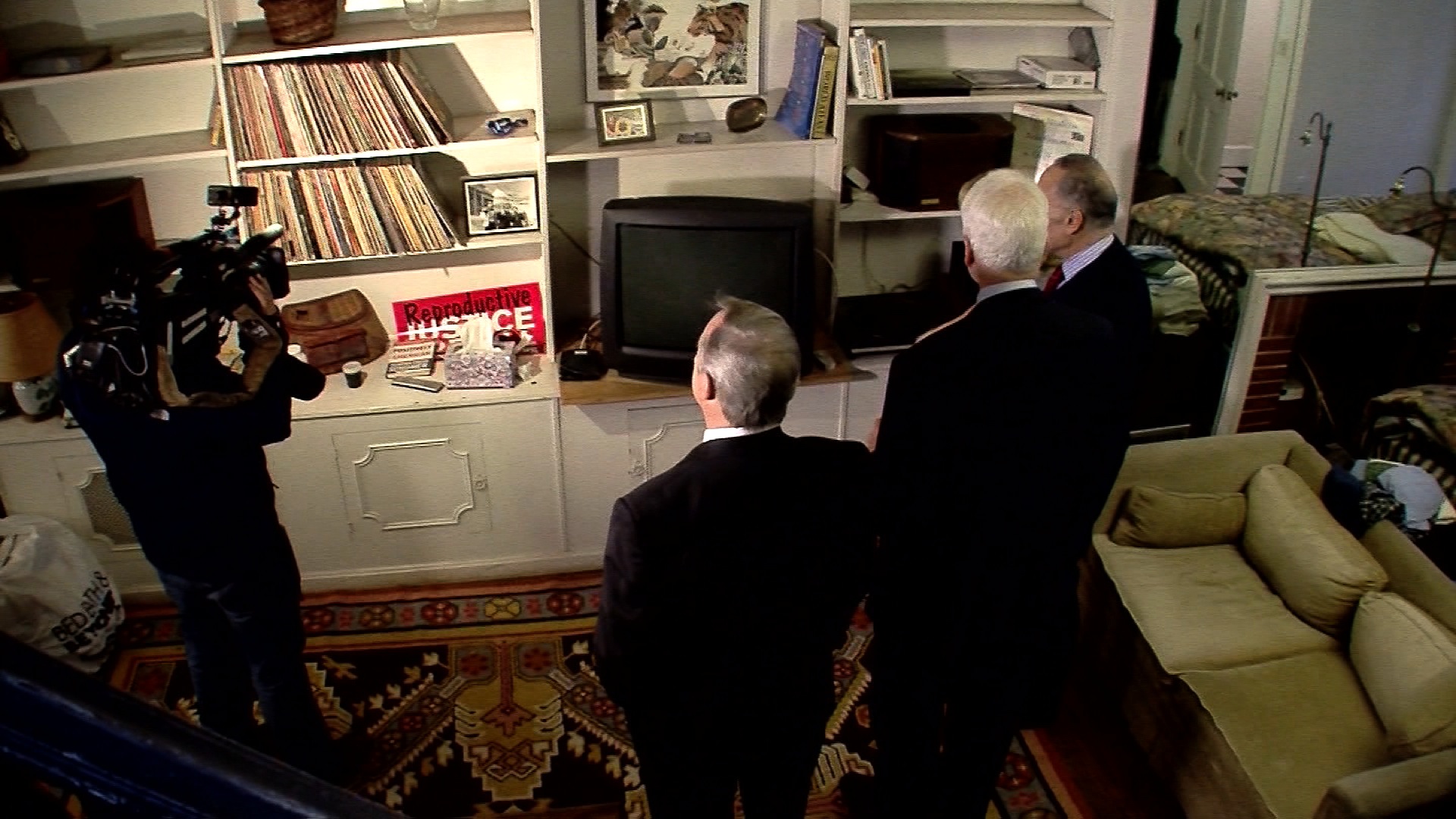 Washington (CNN) — Paint peeling off the walls. Sheets for curtains. Broken blinds. A mangled wicker chair made settable with a board. An ancient stove with a giant hole. And there’s also the pile of underwear in the living room.

What looks and feels like the most rundown frat house on campus is actually the Capitol Hill home of some of the most powerful men in Washington.

“Welcome to the Omega House,” joked Dick Durbin, who is the second-ranking Democrat in the Senate.

“This is where I’ve lived for 31 years,” boasted Chuck Schumer, the Senate’s third-ranking Democrat.

It’s hard to believe half the Senate Democratic leadership lives in these conditions, together. But they have for decades.

When Rep. George Miller, D-California, the third roommate and landlord, came in the door, he immediately ribbed the Senators as deadbeats.

“You guys get the rent from them?” asked Miller.

The house is so legendary that it inspired the new television series “Alpha House” on Amazon.com.

‘How can this work?’

None of the real “Alpha House” members has seen the show, so they said. But they were all quick to say the characters — who are Republicans — are nothing like them.

“How can this work?” asked Durbin. “Republican Senators trying to make out they would live in a place like this.”

They have a point, which may be why the creators of “Alpha House” cleaned up the fictitious home.

Maybe it’s that life is stranger than fiction. Or, more likely, no one would believe prominent politicians would live the way they do in the real Alpha House.

“Wait a minute!” exclaimed Miller, the owner, when we pointed that out.

But he was feigning offense. Thirty seconds with the three and it is clear they revel in the notoriety of their living conditions.

Still, it has been years since they all gathered for this kind of interview and tour of the Capitol Hill row house.

The odd living arrangement began in the early ’80s — when Miller’s family decided they no longer wanted to live in D.C., and moved back to the California district he represents.

Miller was living in the house alone until one night when there was a snowstorm and former Democratic Rep. Marty Russo of Illinois stayed over so he could walk to the Capitol.

They decided to make it permanent since it was convenient. They soon convinced Schumer, a House member at the time, to move in.

They had other roommates over the years that have since retired or been defeated, including former CIA Director and Defense Secretary Leon Panetta, when he was in Congress.

But what is most striking about the place, aside from the mess, is that it’s a time warp. They’ve done virtually nothing to update since Miller’s family left three decades ago.

Jackson Browne and the Beatles

Records — real vinyl — line the bookshelf. One of them was Jackson Browne’s “The Pretender,” which came out in 1976. Another was an old Beatles album.

Then there are the dust-covered books that were bestsellers in the early ’80s.

The furniture is a hodgepodge of what the lawmakers salvaged from various relatives and other parts of their lives.

Durbin took one of the couches from his son, who was about to throw it out.

He said the coffee table is 46 years old — the first piece of furniture Durbin and his wife bought when they were married.

“We’re not afraid of the burglars,” Miller said, “because we’ve been burgled twice and they took nothing.”

The living room, virtually the only room on the first floor of the house, also serves as Schumer’s bedroom. But “bedroom” is a generous term.

He sleeps on a mattress next to the kitchen. He half-made his bed for our visit, which Durbin said was a lot more effort than Schumer usually makes.

“I spruced it up for your coming here,” joked Schumer.

There is no bathroom on the first floor, so Schumer has to use one on the second floor, where Miller and Durbin have actual bedrooms, with doors.

“When you’re my age, at four in the morning to trudge up the stairs to the bathroom, it’s no picnic,” Schumer shared.

Next to his mattress is a door to the outside, with broken and bent blinds.

“I can see the weather without having to get out of bed,” Schumer said. “It’s a special effect.”

His ties are strewn over an old couch, which serves as his makeshift closet.

And then, there’s the kitchen.

The freezer doesn’t work. The refrigerator is a sight to behold, but exactly what you would imagine based on the rest of the house: beer cans and old food, including a baguette so hard that Schumer grabbed it and demonstrated how you can use it as a weapon.

The stovetop has a giant hole, which Miller said, perhaps in jest, was made by the rats they’ve found in the house — which they still have traps around to catch.

“I thought the rats were in the Senate. I didn’t know they came to the House,” Miller said without missing a beat.

Since the only visible cookware is a kettle so rusty and old that Miller joked it was a gift from Ben Franklin, the three men resort to the easiest meal possible: cold cereal.

The counter is covered with bulk boxes of Raisin Bran, Mini-Wheats and Kashi. And there is a giant plastic bag of sweetener, which looks like it has been swiped from various fundraisers along the way.

“I prefer Raisin Bran. But I like the Mini-Wheats,” Durbin said.

“When you come home late at night and you have to still stay up to work, my incentive? Some people like a nice, you know, jigger of scotch. Mine is Raisin Bran. It keeps me up and I read the newspapers,” Schumer said.

What is a typical day in the house like?

Durbin is usually the first one up and out at 5:30 a.m. when he goes to the gym. Next is Miller, who usually takes a morning walk around the monuments.

“They leave while I’m sleeping. We do it by design. We hate each other,” Schumer said, laughing.

In all seriousness, they don’t do much hanging out together here. Unlike the “Alpha House” characters, the real lawmakers are rarely home at the same time.

“He comes in at 12 o’clock at night talking on his cell phone,” Miller said of Schumer. “Half his staff must be in Hawaii for picking up the phone at midnight.”

It is hard to believe such high-profile politicians live in these conditions.

“When my wife comes, she will not stay here,” Schumer confessed.

What helps make it work is that they’re only in Washington about three nights a week.

“It is close to where we work. And it’s easy to get back and forth, and I think that has spoiled us,” Durbin said.

Durbin sums up another reason he’s lived here for 21 years, and Schumer for 31, this way:

Ted Barrett and Laurie Ure contributed to this report