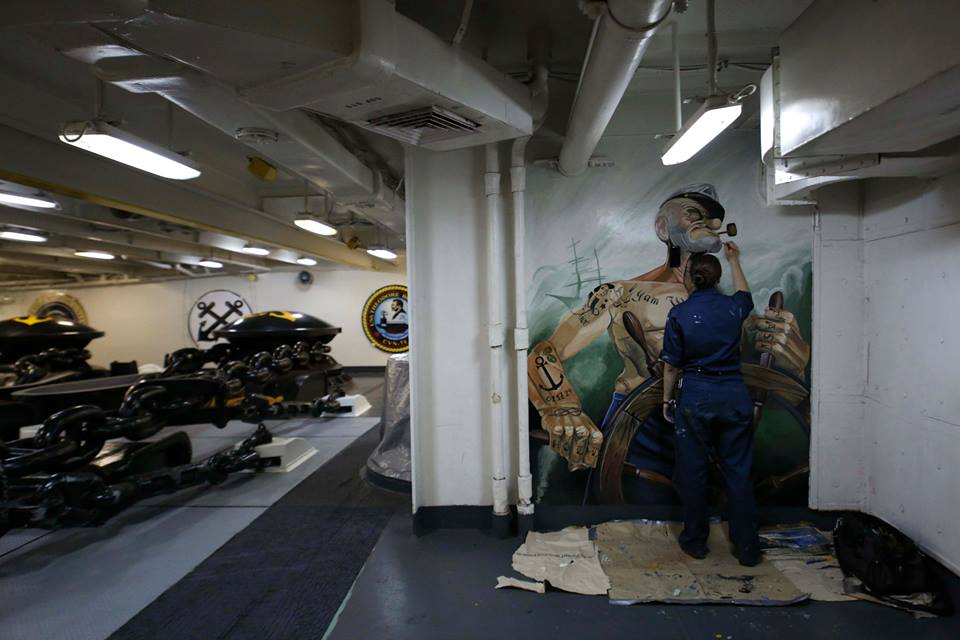 (Aboard the USS Theodore Roosevelt) – In the ship’s foc’sle stands a portrait of a brawny Sailor, with his cover cocked to the side and a pipe in his mouth. He controls the helm as fierce emerald waves crash behind him. Despite the chaotic scene, the mighty Popeye stands strong and proud over Deck Department’s space.

Seaman Marlena Peter, through unexpected circumstances and a gift for painting, is the artist who gives the aircraft carrier USS Theodore Roosevelt its splash of color.

Chief Boatswain’s Mate Edmundo Brantes wanted a mural of two crossed anchors on the deck plates of the Deck department’s office, but the Sailor who sketched out the anchors was in the process of transferring. One of Peter’s friends noticed her doodling in a sketchbook and referred Peter to Brantes. Peter agreed to help complete the painting.

Another shipmate referred Peter to Air department’s V-3 division months later to paint the Aviation Boatswain’s Mate (Handling) rating insignia on their door. Since then, word has spread about Peter’s art work and requests from other departments have been coming in left and right.

“I feel like I blew up,” said Peter. “I had no idea my job could take me right here and that I would be doing this every day. I never thought I could be this good through the eyes of other people.”

Brantes saw the opportunity for her to put her artistic talent to use after departments began requesting more murals all over the ship. Now Peter has a waiting list of requests and is temporarily assigned to the departments she paints for.

“Seaman Peters, she’s extremely talented,” said Brantes. “Why not allow somebody with such phenomenal talent to go out and do phenomenal things for this great nation and this great ship. Her artwork is spectacular, and it builds morale throughout the ship. These murals will be here for many years to come. She’s going to leave her legacy aboard USS Theodore Roosevelt.”

Brantes lets Peter manage her own time allowing Peter to paint as late or as early as she wants.

“This is pretty much my job,” said Peter. “I do paint as such as I can everyday, but if I’m not painting, I usually do deck work. I never seek out people. When I’m painting in a busy area a lot of people approach me. They come with either a picture or an idea.”

Peter has been painting ever since she was a child and said she loves to paint a variety of styles to improve her craft and reach a broader audience.

“One of the coolest requests I have is from reactor,” she said. “They want to make their people into characters from old animes like Dragon Ball Z, Johnny Bravo and Speed Racer. It will be cool because it’s going to be down on the seventh deck where only they can see and take pride in it.”

“It was really heartfelt when the CMC gave me a coin for doing the mural outside his door,” said Peter. “He doesn’t give those out a lot.”

When Peter is on a job, it’s just her and her canvas.
“I’m usually by myself without any supervision, I feel really relaxed,” she said. “I like getting through certain pieces a day. It keeps me really sane. I can just tune out a lot of stuff, plug an earphone in one ear and just go at it.”

Never in her wildest dreams did Peter imagine she would be an undesignated Seaman still doing what she loves. Being an artist. The mural of Popeye is just one of the many paintings Marlena Peter will leave behind.