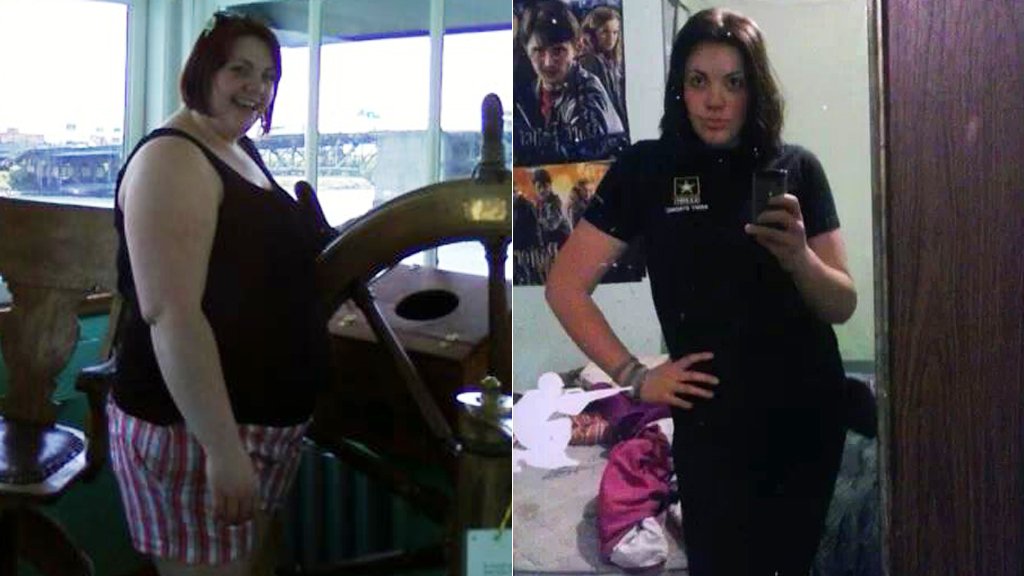 (CNN) – The phone call was short, and not at all sweet.

“Do you weigh more than 160 pounds?” the voice on the other end asked Karyna Douglass.

And that was it. Douglass’ call to the local Navy recruiting center lasted less than five minutes.

“I felt horrible,” she remembers. “I thought maybe I could change that. I didn’t realize how big I actually was.”

It was on a whale-watching trip to celebrate her 22nd birthday that Douglass first toyed with the idea of joining the military. She noticed her fellow passengers on the boat were really enamored with the Coast Guardsmen patrolling nearby.

At the time, Douglass was working a part-time job in Portland, Oregon. She wasn’t having any luck getting student loans to go back to school and was having serious issues with her family. To deal with it, she turned to food, eating fast food during the day and binging on candy when she got home at night.

Chocolate was her drug of choice. Sometimes with a side of ice cream.

“I was realizing that the people who you thought were going to be there for you weren’t at all,” she says. “I felt trapped.”

After the painful phone call, Douglass started running every night around her neighborhood. A few months later she went to the Navy recruiting center in person. As she was about to enter, an Army recruiter from the next office over called out to her. It was the first time Douglass had ever seen a soldier up close.

“I just sort of stared,” she says with a laugh, as the recruiter told her about their morning workout program for potential enlistees.

She dragged a friend to the first training session. They started by running laps, then moved on to push-ups. Douglass left shortly after the warm-up.

“It doesn’t sound like much now, but at that point, oh my God, it made me throw up,” she says. The friends went to get milkshakes to make themselves feel better.

It was two weeks before Douglass gathered the courage to go back. No one from the Army called her. Her friend didn’t push. “I just thought, if I’m really serious I have to give it a shot.”

She worked out with the group every day that week, Monday through Thursday. It was hard, but she realized she could do it.

Douglass started waking up at 4 a.m. every day to take a bus to the group’s morning workout. They run 2.5 to 4 miles, and then she heads to the gym before going to work. On Tuesdays and Thursdays she takes the bus back for an afternoon workout of jumping jacks, mountain climbers and push-ups.

She also overhauled her diet, cutting out fast food, fried food and soda, and limiting her candy intake. Every week she tries a new diet to keep it interesting — one week she avoids carbohydrates; another week she skips meat.

A year and three months later, Douglass has lost 110 pounds. She was sworn into the Army on December 12.

It wasn’t always easy. There were days when she would call Sgt. Cody Baker, the Future Soldier Leader, and quit. “I would go months without losing weight. It was so frustrating,” she says. “I remember … just saying, ‘I can’t do this. I’m never going to be small enough.'”

But Baker never gave up on her. Neither did Douglass’ friends and roommates, who encouraged her to stay on track.

Today, Douglass is “literally a walking Army billboard.” Her clothes, her room and her accessories are all advertisements for her new family. She’s looking forward to basic training, and plans to drop another 20 pounds.

Her advice to others who want to lose weight? Lie to yourself.