Chinese doctors have reportedly saved a man’s severed hand but grafting it to his ankle.

Xiao Wei lost his right hand in an accident at work but it could not be reattached right away.

Instead, doctors stitched the hand to his right ankle and “borrowed” blood supply from arteries in the leg.

A month later, surgeons removed the hand and reattached it to his arm.

According to the report, Mr Wei’s doctors from the Changsha region say he will need to undergo several other operations but they are hopeful that he will regain full function of his hand.

“His injury was severe. Besides ripping injuries, his arm was also flattened.

“We had to clear and treat his injuries before taking on the hand reattachment surgery.” 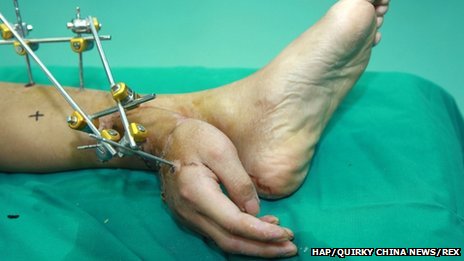