Newport News Police are looking for a man involved in a robbery that took place on Christmas Eve.

Police say they responded to reports of a shooting on Colony Road just before 8:00 p.m.

Officers arrived to find a 29-year-old man with a towel to the side of his head, bleeding from the nose.

The victim said he was walking to a friend's house near Colony Road and Warwick Boulevard when he was approached by six black males between the ages of 18 and 20.

The victim says the men punched and kicked him before robbing him of his money and cell phone.

The investigation revealed that suspects had also sat next to the victim on an HRT bus prior to the robbery. 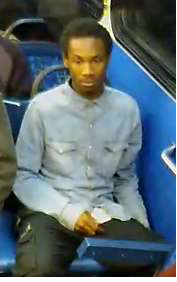 Police were able to obtain photos of that individual. After originally posting the photo on December 27th, police say he has now been identified. The investigation is ongoing.

If you recognize this person and have information, call the Newport News Police Department at 928-4100 and ask for Detective Robert Jones or call Crime Line at 1-888-LOCK-U-UP.