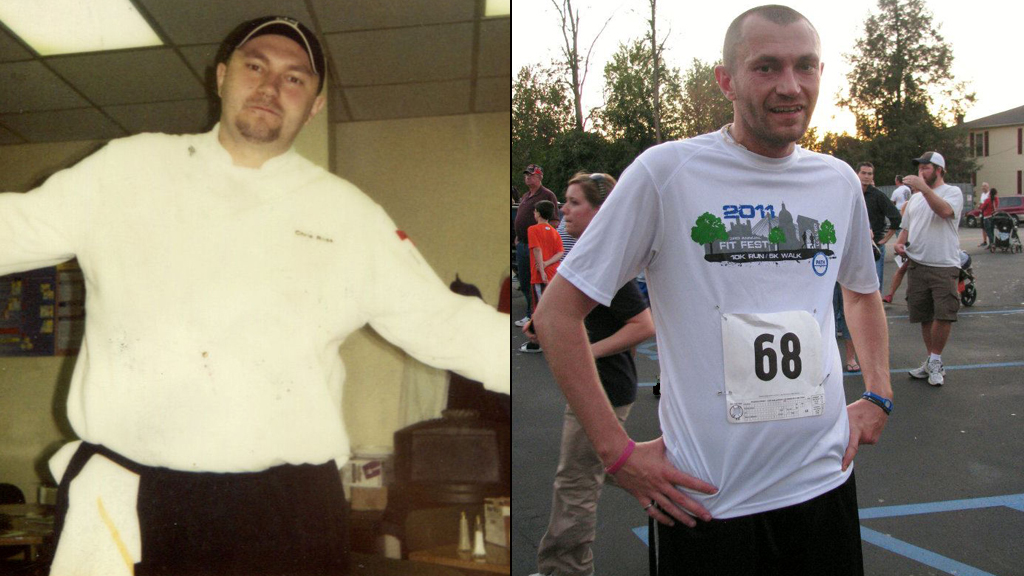 (CNN) – Fried chicken. Mashed potatoes. Collard greens. These were the foods Chris Ross grew up on in rural Kentucky.

“One of the earliest food memories I have is my grandfather making hamburgers … my grandmother frying potatoes,” he says. “Of course, in those days, everything was fried in lard.”

Ross still enjoys those foods, despite having lost — and kept off — more than 100 pounds. He doesn’t make substitutions or skip the bun. His weight loss secret isn’t really a secret at all.

Ross, the executive chef at Bristol Catering in Louisville, Kentucky, started gaining weight after high school while working in restaurants, first as a waiter, then as a cook. At the time, he was studying law enforcement in college, but in between classes, he came home to watch the Food Network. “I just got consumed,” he says.

He didn’t really notice that he had gained 20 or 30 pounds over his freshman year. He ignored the signs when his clothes stopped fitting. Later, when an overweight friend at work mentioned their similarities, he was confused.

Then in late 2004, Ross stepped on a scale for the first time in years. The scale, which only went up to 300 pounds, refused to register his weight. That was bad. When he finally found another scale to tell him the truth, it was worse.

“To realize that you’re not just obese, but morbidly obese, it was pretty tough on the mental psyche.”

Ross started looking at his daily habits a little closer. He switched from regular Coke to Coke Zero and lost 10 pounds over a couple months. Then he picked up a book — “French Women Don’t Get Fat” by Mireille Guiliano — that he saw Oprah Winfrey discussing on her show. As a chef, he’d always had a love for Paris. If anything could motivate him, this was it.

The book talked about eating smaller portions, drinking water and walking everywhere. So Ross started doing the same. He tried to drink eight glasses of water every day, and he made an effort to walk for at least an hour before or after work.

The book’s tips helped him drop another 20 pounds. But it wasn’t enough.

After reading about a New Orleans chef who had lost weight, Ross decided to conduct an experiment. For one day, he wrote everything that he tasted at his restaurant down on disposable spoons and tossed the spoons into a pan. At the end of the day, he tallied the calories. He had consumed more than 4,000 just from tasting his dishes.

“Breakfast, lunch, dinner in addition to that — I was taking in 6,000 calories a day,” Ross says. “And not being an Olympic athlete, it was kind of hard to burn it off.”

Ross couldn’t stop tasting his food. So he started discreetly spitting out his tastes into the trash. From that point on, nothing could stop him.

When he hit 250 pounds, he started jogging. When he lost 10 more pounds, he ran a 5K race. When he got down to 230 pounds, he proposed. Then he and his fiancee started taking a friend’s Zumba class.

“Man, the weight really started falling off then,” he says. “I’m a 36-year-old white guy with no rhythm. It’s a fun exercise when you get over the fact that you feel stupid doing it.”

“I think the only way to really consistently lose weight and keep it off is to develop moderation and portion control,” he says. “You need to eat what you want to eat, just try to maintain control.”

With three kids and a growing catering company, the days of a 40-hour work week are long gone. Still, Ross makes time to run at least four days a week as he trains for the Kentucky Derby Festival miniMarathon on April 19.

His weight fluctuates. Some days, dinner is a McDonald’s double cheeseburger and kid-sized fries. He refuses to give up margarine, despite the FDA’s warnings about the health risks of partially hydrogenated oils. But overall, Ross has adopted the healthy lessons he learned in “French Women Don’t Get Fat.”

“The key? Not guilt or deprivation but learning to get the most from the things you most enjoy.”