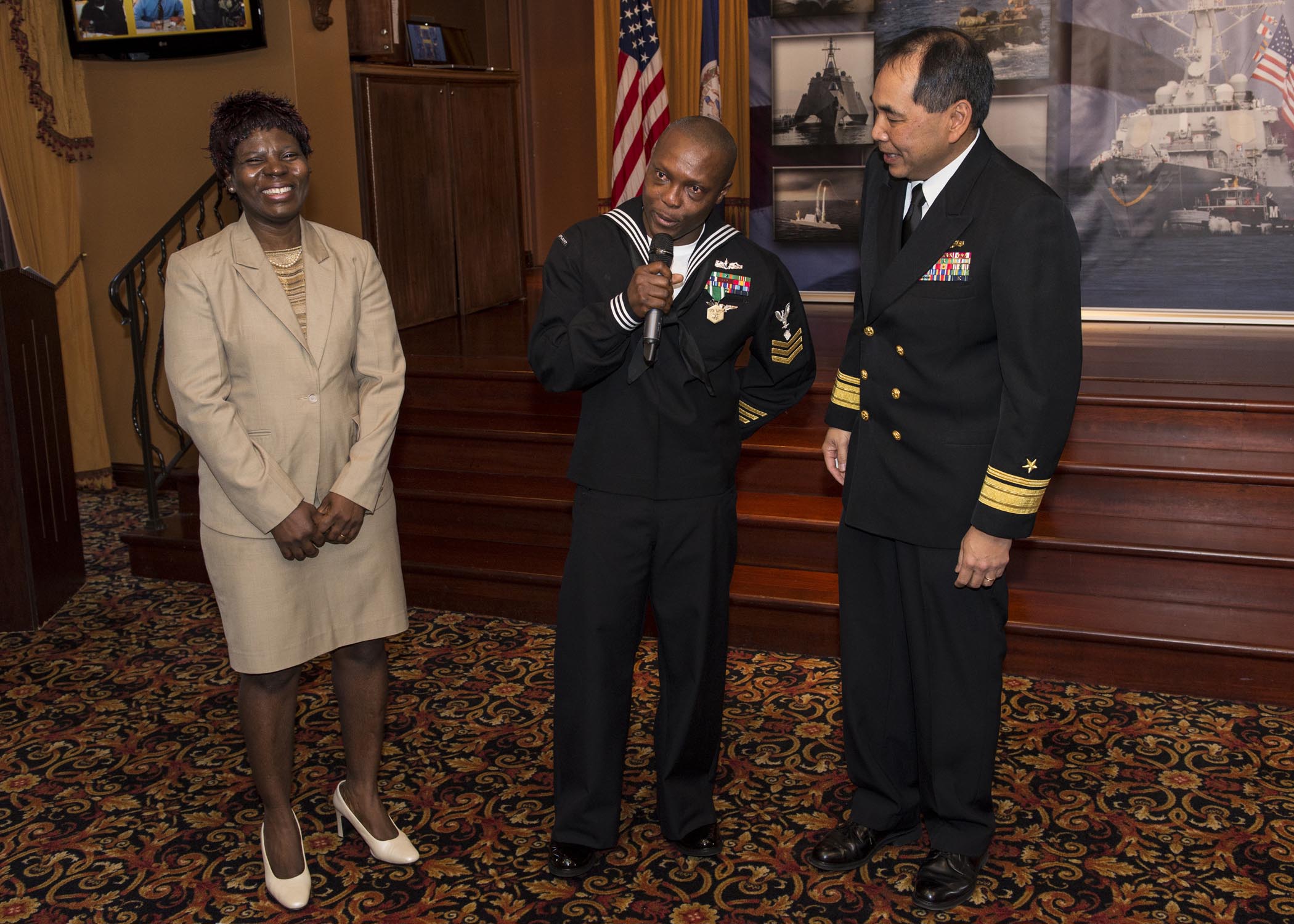 The ceremony was held at the Brashear Conference Center on Joint Expeditionary Base Little Creek-Fort Story.

Petty Officer Okobi a native of Nigeria, is assigned to SURFLANT’s Manpower and Personnel directorate as a force enlisted manning monitor.

“I think it is very important to personally thank everybody who has made it possible for me to be here, especially the junior Sailors I’ve served with. Without them I couldn’t have made it to this point,” said Okobi as he stood next to his wife Vera.  “I also want to thank my chain of command and those who have placed their trust in me. It’s an honor and very humbling to be here.”

Petty Officer Johnson is assigned to the guided-missile destroyer USS Arleigh Burke (DDG 51) which is currently deployed in support of maritime security operations in the U.S. 6th Fleet area of operations. Her husband, Chris, and four-year-old daughter attended the ceremony as she listened on the phone while the ship was conducting a port visit in France.

The excitement was apparent in her voice as the audience heard her respond “yes!”

To maintain uniformity and fairness for all ten finalists, while her shipmates went through the interview process in-person, Johnson was interviewed via phone while being videotaped.

“As a Force Master Chief, this is my first Sailor of the Year week and it was beyond words,” said SURFLANT’s Force Master Chief Suz Whitman. “To see the Sailors’ emotions and the emotions of their families was inspiring. Everybody in the room was totally motivated by the whole process.”

“I think it is very important to note that being selected today is not a personal achievement,” Okobi added.  “It is an achievement for every chain of command I’ve been to, for every Sailor I’ve come in contact with.”

SURFLANT’s SOYs are selected from over 25,000 Sailors serving aboard 76 ships and 26 special mission and support commands around the world. Both Johnson and Okobi will advance to compete for Commander, U.S. Fleet Forces Command Sailor of the year. If Johnson wins there, she’ll be meritoriously advanced to the rank of chief petty officer.  If Okobi wins as Shore SOY, he’ll move on to compete for the Chief of Naval Operations SOY.

The SOY program was established in 1972, by Chief of Naval Operations Adm. Elmo Zumwalt and Master Chief Petty Officer of the Navy John Whittet, to recognize an individual Sailor who best represented the ever-growing group of dedicated professional Sailors at each command and ultimately the entire Navy.