(CNN) — Alanna Gerwitz-Stern hadn’t worked out a day in her life. She never watched what she ate, either. But after having her first son, Jacob, in December 2009, she couldn’t seem to shake the baby weight.

Stern had gained more than 100 pounds during the pregnancy, reaching 230 pounds at 5 feet 6 inches tall. She hid under sweatpants, sweaters and athletic gear. 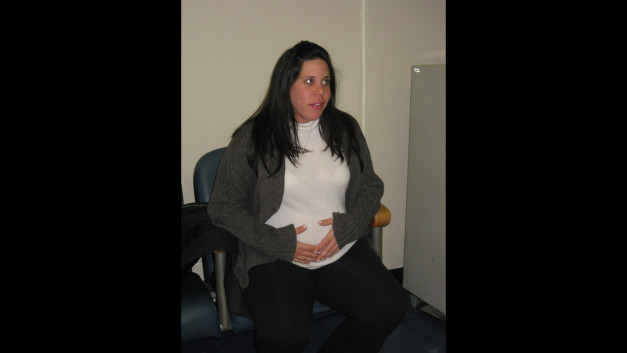 “I was embarrassed to even go to the gym,” says Stern, 33. “I was so incredibly out of shape, and the people I was working out beside were so incredibly fit. I felt like a real eyesore when I would walk down the street.”

Despite her best efforts to drop the extra weight, she had only managed to lose 10 pounds by the following May.

Core Concepts owner Joshua Lipsey says the idea behind his workouts is that your core — made up of your abs, obliques, back and glutes — is your origin of movement. A strong core improves posture and balance and decreases risk of injury.

The core is a major “problem area” for many people, Lipsey says. It’s the spot men and women tend to notice extra pounds first. But because the core includes several large muscles, working it burns calories fast. As such, attacking the core can lead to quick weight loss results, Lipsey says.

After researching Lipsey’s concept, Stern decided to walk in and introduce herself. That day, she signed up for classes and started to shed the extra pounds.

Lipsey had Stern visualize in front of the mirror, and she began to see the body she wanted. She says that built the motivation she needed to meet her weight loss goals.

“We envisioned what my waist, stomach and arms were going to look like, and we just stayed on that path until we were happy with the result,” Stern says. “Josh never let me lose sight of how to get there.”

Lipsey and Stern both emphasize that to see results, you have to change your whole lifestyle.

“If you think the hour that you go to the gym is what counts, it’s really not,” Lipsey said. “It’s doing other things — going for a walk with your dog, not hopping on the escalator at the mall — there’s all these little things.”

After about eight months of eating clean — increasing fruit and vegetable intake while decreasing meat consumption — and attending core and plyometric classes for an hour a day, six days a week, Stern lost 106 pounds, which was even more than she had gained while pregnant.

But shortly after reaching her goal weight, Stern went “from one extreme to another.” She got pregnant with twins. This time, however, she was determined to stay on track. She continued to work out until Lily and Levi, now 18 months old, were born.

Stern gained just 48 pounds during her second pregnancy. She lost 38 of those pounds within two weeks after giving birth and the last 10 pounds by the end of the year.

“The last 10 pounds were hard, like they usually are for people, but she stuck with it and refused to fail,” Lipsey says.

Aside from feeling physically better than ever, Stern also feels less shy and doesn’t avoid going out anymore. She put in the time and effort, and her body responded.

“It was amazing to watch myself accomplish that because the amount of determination it takes to get to that level really is mental just as much as it is physical,” Stern says. “There’s a lot of mental grit you need to have.”

Having three children poses a challenge for keeping the weight off, but Stern says the time put in is worth it.

“It’s one hour a day that I can take to do something good for me,” she says. “I come back to my family reinvigorated and ready for whatever challenges in life lie my way.”

The flexibility of the app has allowed Stern to stay committed to her exercise plan even with three children and a busy schedule after returning to work. While she tries to fit in cardio using a jogging stroller, the app allows her to keep her workouts well-rounded.

Now a size 4 and down to 120 pounds, Stern hopes to inspire other mothers trying to stay healthy through multiple pregnancies.

“I feel very, very lucky that I’ve been able to go through this transformation,” she says. “I wouldn’t change anything — not even the part about being overweight and going through that — because it got me to where I am today. I really am my best self.”