Virginia Beach, Va. (WTKR) – Mayor Will Sessoms laid out his vision for the next six years in Virginia Beach during the annual State of the City address.

During the luncheon held at the Virginia Beach Convention Center Thursday, Sessoms talked about his “2020 vision.”

Sessoms outlined his top four objectives for the next six years, which include transportation initiatives and extending light rail into Virginia Beach, expanding Norfolk International Airport, bringing an arena to the Oceanfront and creating an advanced healthcare institute.

The Mayor was emphatic about the need to extend light rail into Virginia Beach.

“I’m pleased to announce that we have a firm commitment from Governor Terry McAuliffe and Transportation Secretary Aubrey Layne to help with the funding we need to bring light rail into Virginia Beach,” Sessoms said during his speech.

However, Governor McAuliffe’s reached out to NewsChannel 3 following the speech to say that no specific commitments had been made.

In an email, McAuliffe’s Traveling Press Secretary Rachel Thomas wrote: “The Governor is supportive of light rail in communities across the Commonwealth but would need to see a specific proposal and ensure that it is in line with his priorities of fostering economic development and has the support of the local community before making any financial commitments to a project. At this point Secretary Layne and the Governor have not made any specific financial commitments,”

In an interview with NewsChannel 3, Sessoms said he hoped the city could come up with a plan to present the state within the next 30 days.

“Now it’s in the city’s court to determine where we are going to go and how much it’s going to cost,” Sessoms said.

He admits light rail might not extend all the way to the Oceanfront initially because of funding constraints.

“We’ve got to find a responsible way to pay for it,” Sessoms told NewsChannel 3’s Todd Corillo. “I imagine we will be limited to the distance and it might be just to Town Center and it will be limited because of the funding. Without the federal money, we will need more help from the state and from the local government as well.”

Sessoms also announced plans for a possible expansion at Norfolk International Airport during the address.

“An Environmental Impact Statement just got underway for a second runway at the airport, which will ultimately draw more investment, more jobs, and more tourists to our region,” Sessoms stated.

He said discussions with Norfolk Airport Authority Executive Director Wayne Shank and Norfolk Mayor Paul Fraim have already taken place and that the lack of direct flights is one of the biggest complaints he receives.

“One of the drawbacks for coming to Coastal Virginia is the lack of flights, especially direct flights,” Sessoms told NewsChannel 3.

Among the other future plans Sessoms touted was the need to build a sports arena at the Oceanfront and an advanced healthcare institute in the Princess Anne Commons area near the Virginia Beach Amphitheater.

Two companies have submitted bids to construct the arena and Sessoms envisions the healthcare campus as collaborative effort.

At the conclusion of the speech, Sessoms admitted many of the plans he outlined would require investments and he also challenged those in Virginia Beach to hold him accountable.

“The potential outcome of our 2020 Vision is tremendous.  We have the land and the resources to invest.  But we will do so responsibly, and today, I’m asking you to hold me accountable,” Sessoms said.

You can read the text from the State of the City address here. 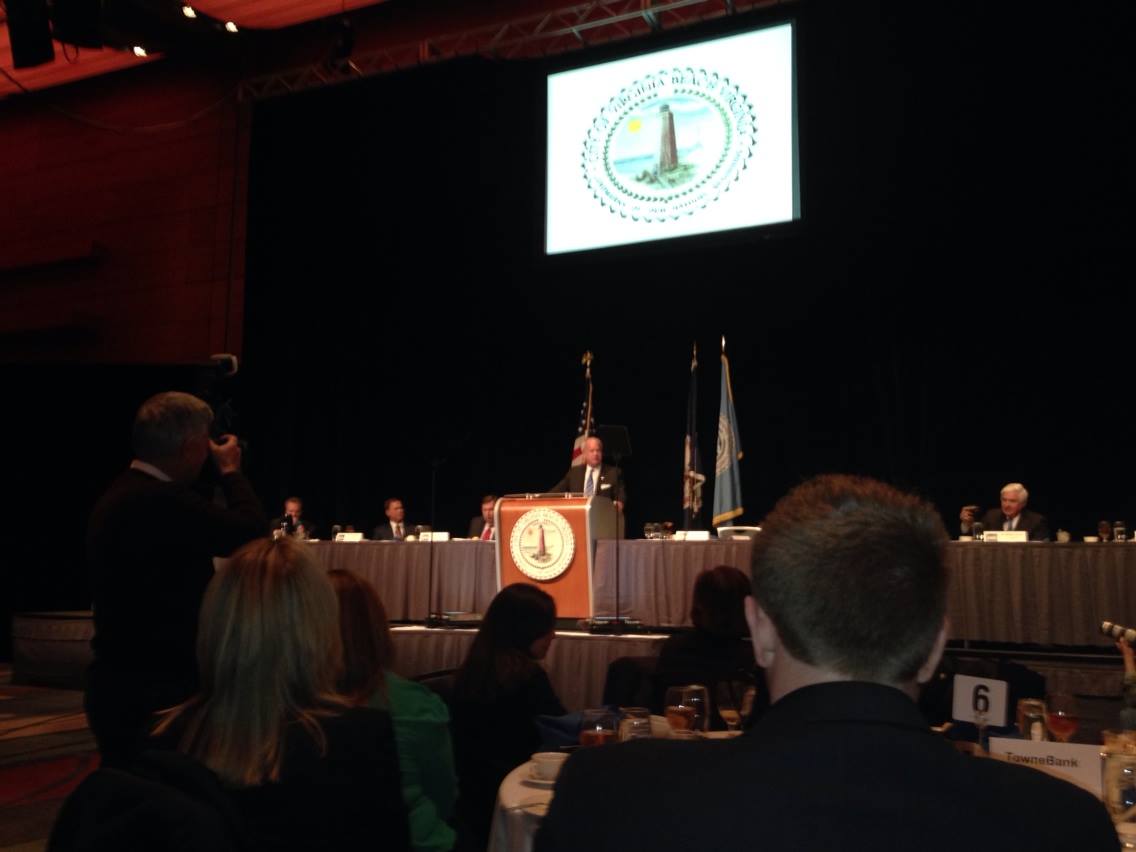 Safest city of our size in the nation. #VirginiaBeachSOC

So we are hearing @VABeachMayor being introduced by President of Towne Bank who apparently had an egg smashed on his back by the Mayor?

#VirginiaBeachSOC #GrowSmart program imperative to help children be ready to begin school well before they go to school, even before born

Where do we go from here? Vision for year 2040 in @CityofVaBeach #VirginiaBeachSOC