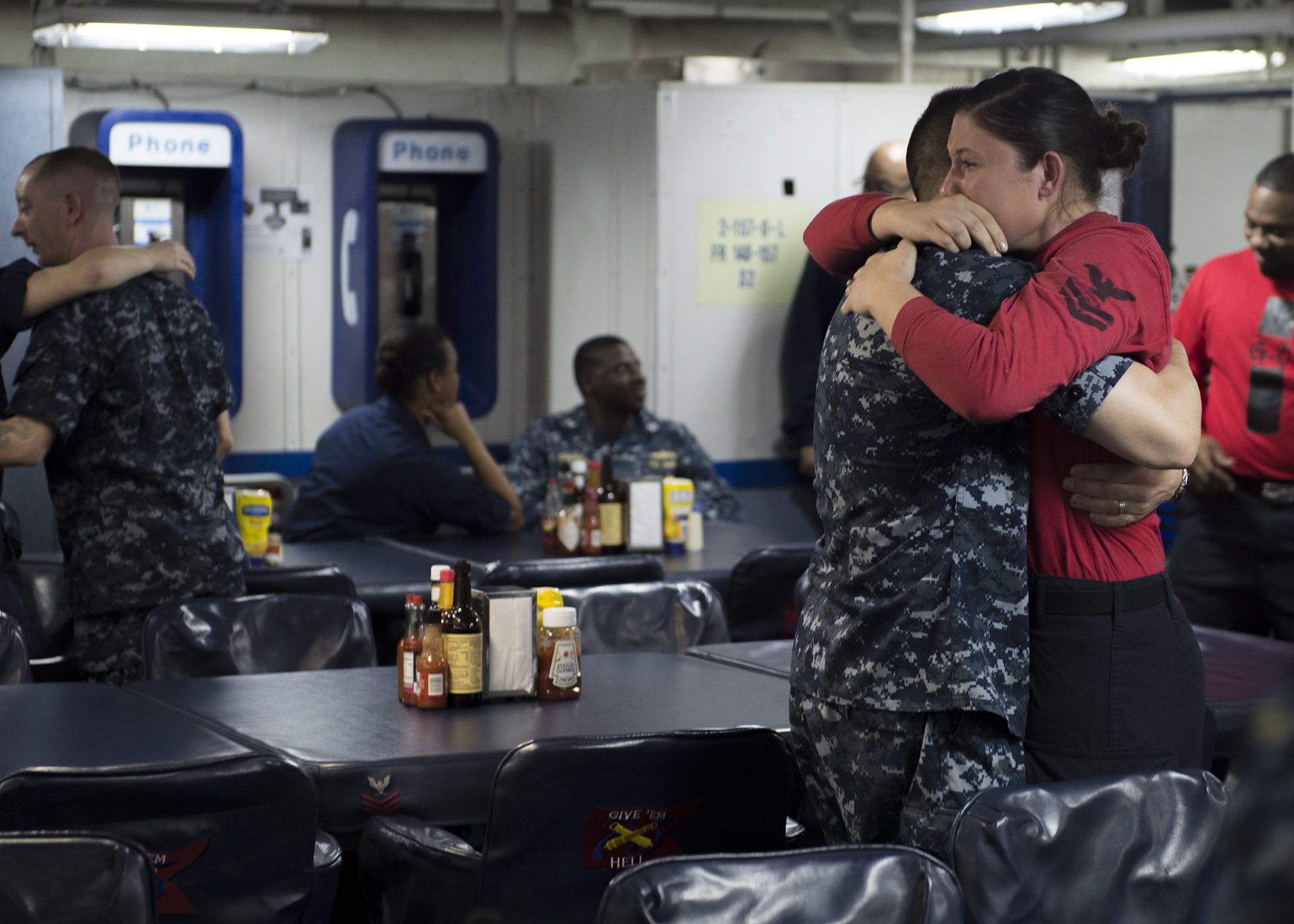 Bush Sailors with family members on board the Truman flew to their sister ship for approximately two hours as the two aircraft carriers conducted a vertical replenishment.

When leaving for deployment in July 2013, Truman Sailors with family members stationed aboard the Bush thought it would be almost two years until they saw their loved ones again. However, they were given an opportunity to say hello and goodbye one more time during Truman’s 5th Fleet turn over with the Bush.

Upon reuniting, spouses clung to each other, brothers shook hands and embraced, and sisters beamed wide smiles at each other as they settled down in seats to talk.

“What better way to finish strong than to see those loved ones that you won’t get the opportunity to see at homecoming as Bush begins their deployment,” said Command Master Chief  R. D. Kemp, command master chief on board Truman. “We have reunited brothers, sisters, husbands and wives who are going 18 months without seeing one another.”

Kemp said planning for the event began several months prior to the turnover when he received a phone call from CMDCM David B. Carter, Bush’s command master chief.

“We’re fortunate to have the assets available to make these reunions happen,” said Carter. “When it comes to taking care of our Sailors and supporting their families, we’ll do what we can to make sure they see each other when they can.”

Twenty-eight Sailors, 14 from Truman and 14 from Bush, toured Truman and had lunch in the first class petty officer mess.

“My brother and I didn’t expect to see each other for almost 18 months so this was nice,” said Aviation Boatswain’s Mate (Handling) 1st Class David Brownlee, assigned to the aircraft carrier USS George H. W. Bush (CVN 77). “This opportunity tells something about the leadership here, allowing us to come see our families one more time.”

Among the reunited were Lt. Linda Sharpe, industrial hygiene officer (IHO) on board Truman, and her twin sister, Lt. Brenda Sharpe, IHO on board Bush.

“I feel like it’s Christmas right now being able to see my sister at the end of a deployment,” said Linda Sharpe. “Not everybody gets the chance to experience this, so it feels like the best gift ever.”

“I knew as soon as she came around that corner the tears would roll seeing her face again,” said Miller. “That was homecoming for me.”

While visiting with Morris, Miller gave her a Truman aviation ordnanceman t-shirt with his cologne sprayed on it so she could smell him before she sleeps at night.

When it came time for the families to depart, emotions came rushing back.

“I just held on to her but I could see tears welling in her eyes,” said Miller. “It was tough to hold back because we know it will be several more months until we see each other again.”

When the turnover was complete, Truman continued their journey home while Bush steamed over the horizon to continue their deployment in the 5th Fleet area of responsibility, but the families’ thoughts remained with each other.

As Linda Sharpe and Miller wait for their loved ones on Bush to come home, they want to remind them to stay focused, stay strong and they’ll be waiting for them to come home.