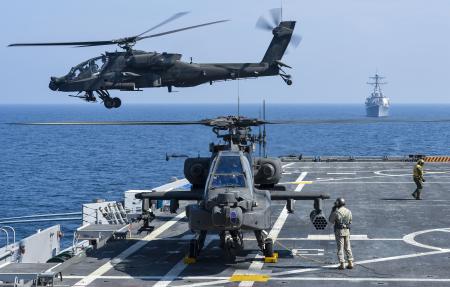 Norfolk, Va. – The Army is considering certifying some of its attack helicopters to operate from ships, according to the Army Times.

That mission has historically been conducted by the Marine Corps, but the Army is looking to broaden the role it would play in operations in the Asia/Pacific region.

The service has been running drills on landing AH-64 Apache helicopters on Navy ships in recent months, but no official decision has been made.

So how does the Marine Corps feel about the Army doing this?

But there would be challenges. While the Army is “making strides in learning how to operate” at sea, Wissler said there is an “unknown, hidden cost” associated with operating aircraft in saltwater environments.

“[Marine Corps] helicopters are different than [Army] helicopters,” he said. “The maritimization of an aviation platform is a very extensive, technical thing. If you don’t do it, you suffer significant challenges.”

Col. Frank Tate, the Army’s chief of aviation force development, said he is preparing to head to Fort Rucker, Ala., in mid-April to attend a conference that would discuss the effects of seawater on the Army’s rotary-wing aircraft.

Read more at the Army Times.