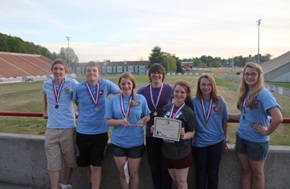 Poquoson, Va. – On April 26, 2014, the Poquoson Middle and High School Odyssey of the Mind (OotM) Structure Teams placed first in the Virginia State Tournament and qualified to participate in the OotM World Competition.

The two teams will now be representing Poquoson Public Schools in this event.

Virginia has a long history of having outstanding structure teams, and by making it to world’s, school officials say it makes them part of an elite group.

The Poquoson Middle School team did a great job in their performance and their structure, school officials tell NewsChannel 3. The structure was eight inches tall and weighed less than four sheets of paper, and could hold 597 pounds — their personal best for the year and the highest weight held at the tournament.

The Poquoson High School also held a performance on the issue of bullying. Both the audience and judges were moved by their skit and its message, officials say. Their structure held 412 pounds, the highest weight held for a high school team.

Their first place finish qualified both teams to advance on to the World Finals at Iowa State University on May 28 – May 31.

Those who are interested in supporting the team on their quest to Iowa are asked to please contact normanremchuk@gmail.com.