Virginia Beach, Va. - Police are searching for two men who they say robbed a woman at gunpoint in a Virginia Beach apartment complex parking lot.

It happened on Friday, May 2, 2014 at approximately 9:53 p.m. Police say the victim had just pulled into the Tivoli Apartments parking lot located at 1207 Tivoli Crescent. Before the victim could exit the car, a black male suspect approached and tapped on her window, displayed a handgun, and robbed the victim of her purse.

The suspect then fled in an unknown direction of travel, police say.

At approximately 10:30 p.m. the victim’s credit card was used at the Navy Federal Credit Union ATM at 7979 Hampton Boulevard, Norfolk.

Police are asking for anyone with information about this crime to call the Virginia Beach Crime Solvers Office at 1-888-LOCK-U-UP or text VBTIP with your information to CRIMES (274637). Tipsters remain anonymous and are eligible to receive a cash reward of up to $1,000 if their information leads to an arrest.

Two ATM surveillance photos are posted above. In photo two, please note the scar and tattoo of the first suspect. 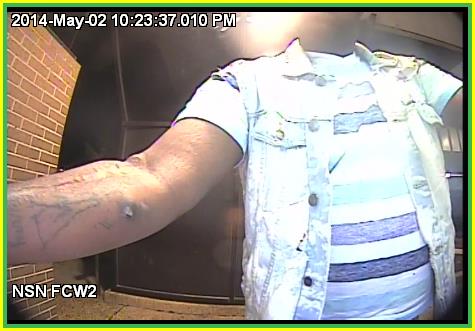