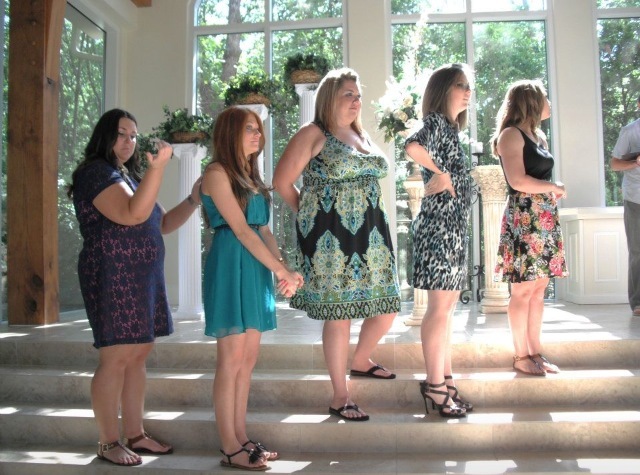 The 5-foot-6-inch teacher weighed 235 pounds and suffered back pain almost constantly. She was popping 10 to 15 ibuprofen daily, which took a toll on her stomach. It didn’t help that she was on her feet most of the day and dealing with the stress and exhaustion of being a relatively new teacher.

Her husband never once said anything about her weight, which made her feel worse about not taking care of herself. She had quit smoking, but knew she needed to get active because climbing stairs still left her winded.

“I really married the most sweet, wonderful, compassionate man in the world. He never made me feel bad about it, so I think I felt more guilty,” said Tarver, 29, a high-school agriculture teacher who lives in the Fort Worth, Texas, area. She remembers thinking, “Why aren’t you taking the initiative? This man loves you for who you are.”

“I found myself crying in bed one night over my weight, and my husband told me that he thought I was beautiful, but if I was so unhappy, I should do something about it,” Tarver wrote on CNN iReport. “This triggered something in me.”

The very next day, she said, she began monitoring her calories and walking or riding the stationary bicycle six days a week. After two months, she was brave enough to step foot inside a gym. That was January 3, 2013.

Soon after, she signed up for her first Zumba class.

It was the beginning of her new life.

Tarver started sampling every available evening dance class. As the daughter of an aerobic dance instructor, the movements came easily. By the third week, she wanted to be there all the time, dancing to exhaustion under the club lights in the gym’s group fitness room. She supplemented classes with one to two nights working out on the elliptical machine and lifting weights.

“My instructors were amazing, and made me feel like they loved having me there,” she said. “I was having a blast exercising for the first time in my life.”

One of her instructors, now a close friend, found her on Facebook and would message her if Tarver missed a class. She also offered to make her CDs with music she noticed Tarver liked in class.

After 10 months, Tarver’s teacher encouraged her to get certified to teach her own classes. Tarver has been teaching Zumba and other classes that combine fitness and dance for the past four months, in addition to the classes she takes.

“You really feel like you’re in a club, dancing with people, but you don’t have a hangover in the morning. At the end of it, you feel awesome, you’re exhausted, and you can go back and do it tomorrow if you want. It’s good for your soul, if you ask me.”

Tarver knew exercise wasn’t enough to really get healthy. She had to change her eating habits, too. She didn’t follow a particular diet, but stuck to a few principles.

The first few months, she rarely ate out, if at all, and cut out fast food in favor of salmon or grilled chicken with vegetables. At school, she ate a protein shake or bar for breakfast, a banana, apple, pear or some clementines for a snack, more fruit and a low-calorie frozen dinner for lunch. She used a calorie counter app on her phone to track her intake, sticking to about 1,500 to 1,700 calories per day based on how fast or slow she was losing weight.

She also cut out dairy, which was probably the hardest sacrifice.

“I could drink a whole gallon of whole milk in two days. I really, really liked cheese and milk a lot,” she said. “It was difficult at first because I was so conditioned to eating cheese, but I felt better.”

After a couple of months, she allowed herself one cheat meal a week — two bacon and egg taquitos from her favorite fast food chain every Tuesday. She still has that ritual, but is a little freer with her diet on the weekends.

When Tarver started her weight loss journey in November 2012, at 235 pounds, she wore size 22 pants and was about 42% body fat. Within 14 months, she was down to 135 pounds, a size 6 and 21% body fat. Her back pain is almost completely gone, she has her dream body and is “the happiest I have ever been.”

“I can’t believe how easy it was — how fast the weight came off when I was doing the right thing,” she said. “I’m thrilled out of my mind with my body.”

Her husband, Tom Tarver, says Roni has always been beautiful, but it’s clear to him how much better she feels.

“I’m very proud of her, and I would choose the way she feels now over however she looks,” he said. “She’s happier, and she is just a fun person to be around. It’s the kind of person you want to be married to.”

Tarver fluctuates between 130 and 135 pounds and considers herself to be in maintenance mode; she carries around some extra skin from the weight loss, but will happily accept the extra skin over the extra weight.

“If I could give one piece of advice to anyone struggling with their weight, it would be to find something active that you love doing, and don’t give up,” Tarver said. “Consistency is key to making any lifestyle changes. Find a support system and tell people what you are trying to do for yourself. When you say it out loud, you become accountable.”