The first section of the new Midtown Tunnel arrived in Portsmouth on Friday afternoon after being towed from its fabrication facility in Sparrows Point, Maryland.

Click here to track the progress of the tunnel sections as they make their journey.

ERT says they flooded the drydock at Sparrows Point early Monday morning and moved the first six completed sections temporarily into the Baltimore Harbor where they will stay before being towed to Portsmouth.

Each section will be towed down one at a time. They each will take approximately four to seven days to arrive in Portsmouth.

All six elements will then be moored at the Portsmouth Marine Terminal until installation.

Once the first six elements have left Sparrows Point, construction will begin on the final five elements.

Installation of all 11 tunnel segments in the Elizabeth River is scheduled to begin this fall.

All Midtown #Tunnel tubes now floating! Here's another shot from this AM #MovingMidtown @DriveERT #construction pic.twitter.com/ihC2RwuAhU 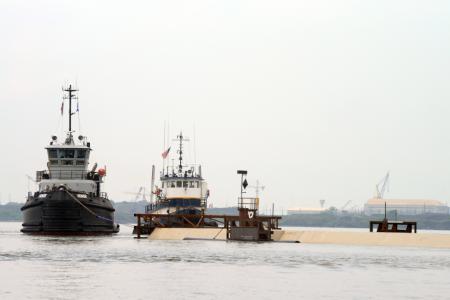