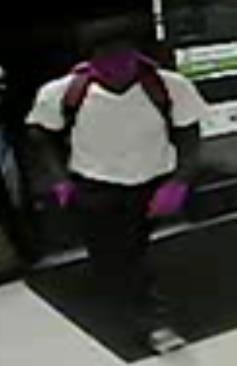 Since June 16, 2014, there have been three convenience store robberies and one attempted restaurant robbery that share similarities.

The cases appear to be linked, police say.

In all cases, the suspect(s) enters the business with a handgun and demands money from the clerk.

Suspect one is described as a black male in his mid-20s, 5’8” to 5’ 9”, thin build; he is seen in the photos carrying the knapsack with black and red straps and pink/red gloves.

Suspect two is described as a black male in his mid-20s, over 6’ tall, thin build; he is seen with a black and camouflage knapsack and white gloves.

Anyone with information about this crime is encouraged to call the Virginia Beach Crime Solvers Office at 1-888-LOCK-U-UP or text VBTIP with your information to CRIMES (274697). Tipsters remain anonymous and are eligible to receive a cash reward of up to $1,000 if their information leads to an arrest.

These cases remain under investigation by the Department’s Robbery Squad.