Did a 16-year-old unseat Ellen’s Oscar Selfie for the coolest ever? 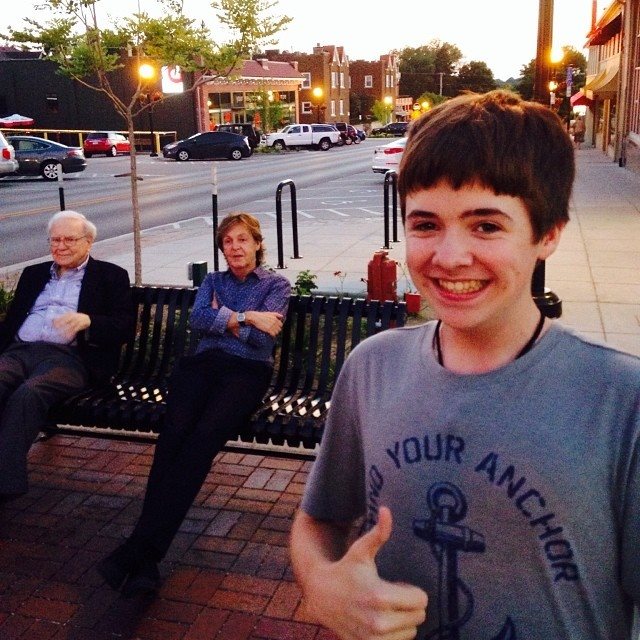 A 16-year-old snapped one of the coolest selfies ever.

Tom White captured himself with Billionaire Warren Buffett and Sir Paul McCartney sitting on a park bench in Omaha, Nebraska.

The teen flashed a smile and a thumbs up as he took the picture.

According to Omaha.com, the picture was taken Sunday night, after the famous pair had dinner at an Italian Restaurant, and were taking a breather before going to an ice cream shop.

Do you think this picture is cooler than the Ellen Oscar selfie?

He may not be a paparazzo, but Nebraska teen Jacob Murray has snapped the latest viral celeb photo.

On Sunday night, Murray, 16, took a photo of his friend Tom White on an Omaha, Neb., sidewalk — standing in front of Warren Buffett and Paul McCartney as the two men sat casually on a bench in the background. White tweeted the image, and by Monday it had gone viral.

“Chillin with my homies” said White’s tweet, which linked to a copy of the image on Instagram.

Murray, White and another boy took a series of photos with the two men on Sunday, according to Murray’s father, John.

The image was later re-tweeted by Paul McCartney’s Twitter handle on Monday afternoon.

Earlier in the evening, the billionaire CEO of Berkshire Hathaway (BRKA) and the Cute Beatle had dinner at Avoli Osteria, an Italian restaurant in the Dundee neighborhood of Omaha, according to Omaha.com.

Next, the two headed to eCreamery, a local ice cream shop, according to co-owner Becky App.

“Warren comes in here quite a bit, but he’s never brought Sir Paul as a guest before, so it was pretty exciting,” App said.

Tom Becka, a local radio host, also grabbed a blurry pic of McCartney in town on Sunday. But Becka, 58, says he wished he’d jumped in like White.

“It kills me that I didn’t think of that,” Becka said. “Different generation: The selfie didn’t occur to me.”
McCartney will be playing in Lincoln, Neb., on Monday night, according to his website.