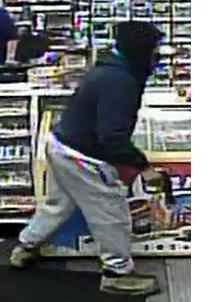 Virginia Beach, Va. – Beach police are searching for a suspect wanted in a string of robberies throughout the area.

Since February 11, 2014, police say there have been seven robberies that share similarities.

In all cases but one, the suspect(s) enters the business with a handgun and demands money from the clerk.

In one case, the suspect confronted the victim who was sitting in a parked car in the parking lot.

The suspect is believed to be responsible for two similar robberies in Chesapeake.

No injuries have been reported, police say.

In the recent July 16 robbery, police say the suspect was wearing a dark blue ‘zipper hoodie’ over a black hoodie that had a multi-colored lining, a multi-colored scarf covering his face, gray sweat pants, a white ball cap and tan work boots.

Anyone with information about this crime is encouraged to call the Virginia Beach Crime Solvers Office at 1-888-LOCK-U-UP or text VBTIP with your information to CRIMES (274697).

Tipsters remain anonymous and are eligible to receive a cash reward of up to $1,000 if their information leads to an arrest.

These cases remain under investigation.