It’s a new U.S. Marine Corps vehicle for getting stuff like troops, tanks and trucks from ships to shore and back.

The Corps showed off a prototype of its Ultra Heavy-lift Amphibious Connector (UHAC) last week during Rim of the Pacific exercises in Hawaii, running it from the Navy’s amphibious dock landing ship USS Rushmore to the beaches of Marine Corps Training Area Bellows on Oahu.

“Showcasing the UHAC during RIMPAC is a big deal,” Dave George of the Marine Corps Warfighting Lab, which developed the UHAC with funding from the Office of Naval Research, said in a press release. “This is a great way to let people know that this new technology is being developed.”

Here’s how the UHAC works: The tracks, which are made of what the Marines call “captured-air foam blocks,” extend like flippers to propel the craft through the water. When it hits the beach, the foam flattens to become like the tracks on a tank or a bulldozer, only much softer, according to a report from Stars and Stripes.

Last week, the UHAC prototype, which is about half the size of envisioned production models, carried an assault vehicle from the Rushmore to the beach. The Marine Corps says a full-size UHAC would be able to carry much more.

“The full-scale model should be able to carry at least three tanks and a HMMVW (High Mobility Multipurpose Wheeled Vehicle),” Gunnery Sgt. Joseph Perera, the Warfighting Lab’s Infantry Weapons Project officer, said in a statement. That’s about three times the load that the Corps’ current craft assigned to the task, called a Landing Craft Air Cushion (LCAC), can handle. 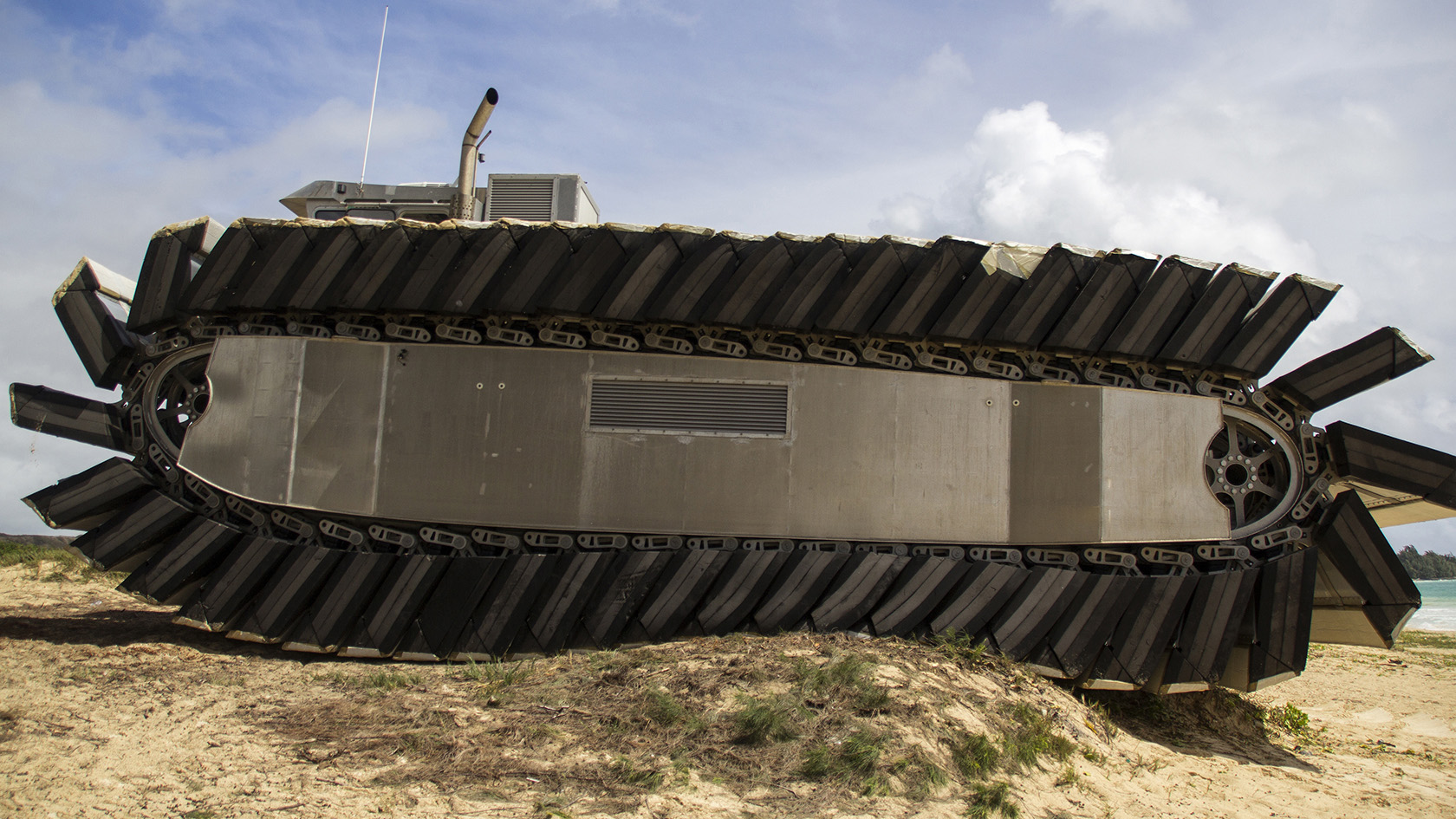 It also will be able to surmount bigger obstacles. While an LCAC can only get over a 4-foot-high sea wall, a full-size UHAC will be able to get over sea walls as high as 10, 12 or even 16 feet, according to the Corps.

The UHAC prototype type is not armored or armed, but Perera said production models would have armor plating and .50-caliber machine guns for protection.

They also would be much faster. The prototype could only go 5 mph on the water, but a full-size UHAC should do 25 mph, Gen. Kevin Killea, commander of the Corps’ Warfighting Lab, told Stars and Stripes.

The UHAC prototype used last week is the third in the program, built upon a concept originally proposed by the Hawaii-based shipbuilding and research firm Navatek, Ltd.

“There has been a one-fifth scale model, then a one-quarter scale model and this is a half-scale model, so we have been progressing,” Frank Leban, program officer at the Office of Naval Research, said in a statement. “Every vehicle has incorporated more features and technology to help get us to the full scale.”

There’s no word yet on when the full-scale model may actually come, but officials were happy with last week’s demonstration.

“This is a great way to show what it can do,” said George. “Today went quite well.”